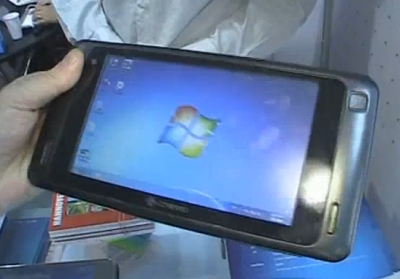 Wandering the show floor at CeBIT in Germany, jkkmobile stumbled across 2 nice looking tablet computers from DPT. Both feature 7 inch displays, but one model has a 1024 x 600 pixel display and runs Windows 7 while the other is a Windows XP tablet with a lower resolution 800 x 480 pixel display.

The Windows 7 version has a multitouch display, 8GB to 16GB of solid state storage, and an Intel Atom Z5xx series processor. It has 1GB of RAM, 802.11b/g/ WiFi, and an HDMI output as well as a SIM card slot and an optional 3G module.

We’ve seen a lot of Windows XP and Windows 7 tablets over the past few months, but I’m still not convinced there’s a very large market for these slate PCs. The technology to produce them has been around for years, and to be honest, companies have been selling them for quite a while. But while they’ve definitely been popular in certain niche markets and among a small group of enthusiasts, they’ve never really taken off with the general public. I have the feeling that if the Apple iPad takes off, it will be tablets running Google Android or Windows CE that give it a run for its money, not tablets running a desktop operating system designed for use with a keyboard and mouse.

You an check out jkkmobile’s hands-on video after the break.