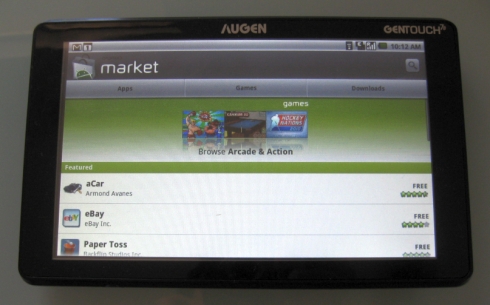 When KMart started advertising that the Augen GenTouch78 tablet which the store was selling for $150 would have access to the Android Market, I was skeptical. Google may not review every  app in the Android Market with as much rigor (and suspicion) as Apple does with the iTunes App Store. But to date, Google has only allowed smartphone makers to include the company’s app marketplace on their devices. Tablets need not apply.

But when I actually moseyed on down to my local KMart to pick up an Augen GenTouch78, I was surprised to discover that it really did have the Android Market installed. There’s just one catch — it doesn’t work properly. You can browse the market or search for apps. But when you actually try to download apps, nothing happens.

Augen has promised that a fix is in the works — but I wouldn’t bet on it happening anytime soon. The folks at Laptop Magazine reached out to Google and received confirmation that Augen’s use of the Android Market was unauthorized.

While Google Android is an open source operating system based on Linux code, many of the apps that run on Android are not open source. And that includes the Android Market, which Google controls. So if Google doesn’t want it to work on the GenTouch78, it probably won’t.

There have been indications that Google plans to open up the Android Market to support tablets in the future. But a few things may need to change before that happens. Google could tweak the market so that it only shows apps that are compatible with the device you’re currently using, or Google could insist that hardware makers produce tablets meeting certain specifications in order to gain Market access.

Either way, it looks like Augen may have a hard time convincing Google to enable Market access on its budget tablet. But there are other ways to install Android apps. You can download APK installer files and copy them to your tablet’s microSD card. And you can even install third party app stores such as the SlideMe Application Manager, which will make it easy to download and install some apps directly from your tablet. But I haven’t found a third party app store that comes close to the Android Market in terms of the sheer number of apps available.

Update: Augen says that future versions of this tablet won’t ship with the Android Market, Gmail, or other Google apps — although the company is in negotiations with Google to include those apps on future devices. But Augen did release a couple of software updates this week that improve the user experience by offering a third party app store and making the touchscreen display more responsive.