Dolphin Browser for Android made a name for itself years ago when it was one of the first Android web browsers to support tabs, gestures, and a few other features that only later became available in Google’s official web browsers.

But now that Chrome and the stock Android browser both support tabs and much more, there are still some good reasons to use Dolphin. It’s fast, has an easy to navigate layout, and it supports some excellent plugins such as the LastPass password manager (until Chrome for Android can use LastPass, I’m probably not leaving Dolphin).

Now Dolphin is sprucing things up yet again with a new layout and an emphasis on web apps. 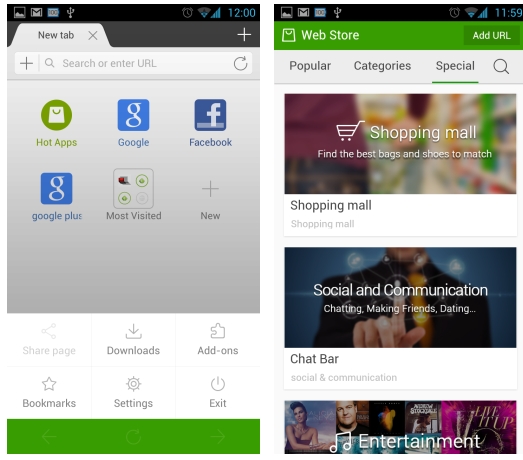 Dolphin 10.0 for Android has a new, lighter color scheme, a tweaked new tab page which shows larger icons for your favorite websites, and which lets you group shortcuts into folders by dragging and dropping them, much as you would do with apps on the Android home screen.

There’s also a big “New” button that takes you to Dolphin’s new Web Store, where you can find web apps to add to your browser home screen. Dolphin is trying to push the browser as your “second home screen,” encouraging you to use web apps instead of native apps for many functions.

The new version looks nice… but the main reason I’m still using it is because of the support for plugins. Firefox for Android also supports third party plugins,

Update: Well, what do you know? It looks like there is a LastPass plugin for Firefox, and it works pretty well, although the browser generally still feels kind of sluggish when compared to Dolphin. If I was a desktop Firefox user I’d definitely consider using the mobile app though, since it has good support for plugins and the ability to sync with your desktop browser.

2 replies on “Dolphin Browser 10 for Android gets a makeover, emphasis on web apps”