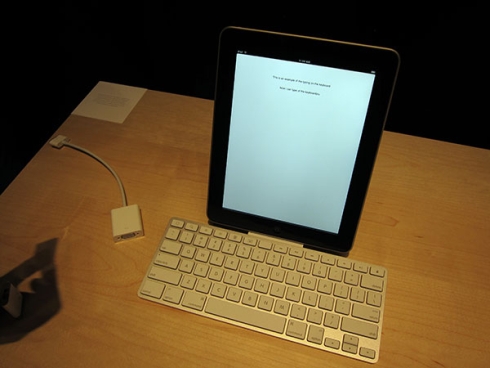 Apple CEO Steve Jobs took a few pot shots at netbooks during the iPad announcement yesterday, saying they’re “not better at anything” than laptops or smartphones. And that’s kind of true. A netbook isn’t better at playing videos, surfing the web, playing games, or editing documents than a 15 inch laptop with a speedy processor and GPU. And a netbook doesn’t fit in your pocket or turn on as instantly as a smartphone. But you know what netbooks might be better than in a lot of respects? The iPad.

Basically the iPad looks like a wonderful device for consuming digital media. A 1.5 pound device that’s virtually all-screen could really provide a better experience for reading eBooks or web pages or watching videos than a 2.5 netbook with a keyboard that kind of gets in the way.

But if you want to create content, then a netbook seems like a much better way to go. A nearly full sized physical keyboard is much easier to use than an on-screen keyboard. And while Apple pointed out that the on-screen keyboard on the iPad is nearly the same size as a laptop keyboard, all the promotional pictures and videos I’ve seen of people successfully using the on-screen keyboard showed them lying on a couch with their legs up and the iPad precariously placed on their thighs.

Try placing it on a table and typing with 10 fingers without hurting your neck. Or try pulling the iPad out on the train or an airplane and typing with it on your lap. Same problem. You could try to use your thumbs the way you do on an iPhone or Blackberry, but I doubt they’ll reach from one side of the 10 inch tablet to the other.

Apple will be selling a $69 keyboard dock. But there are at least three problems with this approach:

I’ll admit, netbooks aren’t necessarily the best devices for watching movies, reading books, or playing games. But a device that treats people simply as passive media consumers feels very outdated. If you want to send emails, write documents, leave comments on web sites, update your blog, or do any of the hundreds of other things that we’ve come to expect computers to let us do over the past decade, netbooks seem to trump the iPad.

And that’s without even getting into the fact that netbooks are cheaper, support multitasking, work with Adobe Flash, allow you to choose your OS, and fun full desktop applications.

The point of this article isn’t to say that the iPad is useless. I think it’s actually a pretty slick device and for the right price I might even consider picking one up to use as an eBook and movie player. But it’s hardly a replacement for a netbook.

32 replies on “Does the Apple iPad spell the death of netbooks?”