Every time there’s a new version of Windows someone will complain that it’s tougher to use than older versions or messes up the user interface. But for the most part Windows has looked pretty much the same since Windows 95, with a start menu, desktop, and taskbar.

Windows 8 will change all that when it launches on October 26th. You can still access a taskbar and desktop, but the start button and menu have been replaced with a new Start Screen and Microsoft has put a huge emphasis on touch-friendly gestures. 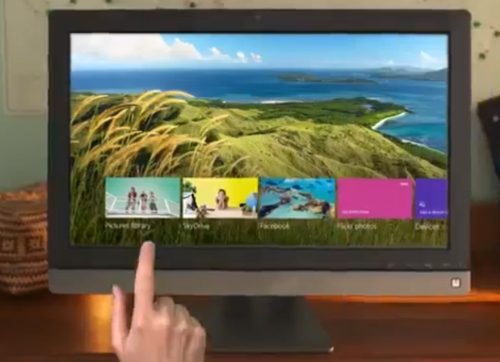 At the very least, the new user interface will take a little getting used to. So it’s clear that Microsoft’s upcoming Windows 8 marketing campaign won’t just be showing off new features… but also how to use them.

Israeli blog Techit has posted YouTube videos of several Windows 8 ads. These videos and more showed up on the Amazon UK product listing for Windows 8 recently, and were posted in the WinUnleaked forum last night.

Update: Unsurprisingly, the videos have been removed from both Amazon and YouTube.

But I have to wonder… do these ads make Windows 8 look appealing? They certainly show a UI that looks like it could compete with iOS or Android, but what about Windows 7?

Sure, you can still run desktop-style apps, but to perform some basic functions you have to switch to a full-screen Start Screen or drag out a charms bar or search tool from the side of the screen.

What’s more, there are basically two different user interfaces to learn. You have to get used to closing desktop-style apps by tapping on an X box or scrolling by moving scrollbars, while closing (or scrolling) in full-screen Metro-style apps by swiping.

After seeing these ads, what do you think ? Are you looking forward to Windows 8?

14 replies on “Do these new ads make Windows 8 look easy?”