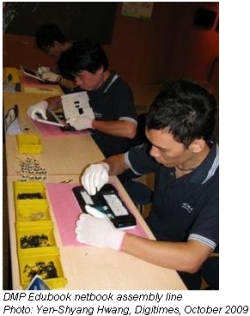 Remember when we used to call the OLPC XO Laptop the $100 laptop? OLPC founder Nicholas Negroponte overpromised and underdelivered when it came to price and the XO now costs closer to $200. That’s still pretty impressive, all things considered, and the XO really did launch the netbook revolution. But the price never dropped to the promised $100 level, and so the idea of a $100 laptop was a bit of a marketing mishap.

But since then we’ve seen several companies push out fairly crappy laptops that really do run closer to $100 than $200. And you can often find refurbished first generation netbooks like the Eee PC 701 going for $150 or less.

Now DMP Electronics in Taiwan is getting in on the $100 laptop action with a machine called the Edubook. If the name sounds familiar, that’s because the computer seems to be based on a similar design and concept as the Nohrtec Gecko Edubook. Both the DMP and Nohrtec versions run on AAA batteries and feature a modular design that lets customers choose the components they need and assemble the laptops themselves to save money.

Nohrtec is selling the Edubook for about $200, but the company has been promising for a while that you’d be able to pick it up for a lower price if you choose barebones units and order in bulk. With that in mind, it’s not entirely clear what you get for your $100 if you order a DMP version. I’m not betting on WiFi being included in the cost.

Update: The DMB version of the laptop will apparently be a barebones machines with a CPU, motherboard, and display but no storage, batteries, power cord, or WiFi. In other words, if you want a completely functional computer, you’re still going to have to pay more than $100. See the comment from Michael Barnes of Nohrtec below for more details.

What you do get is a cheap netbook with an 8.9 inch display and a low power CPU. If the DMP Edubook uses the same processor as the Nohrtec model, it’s an x86-compatible 1GHz Xcore86 CPU that can run Windows or Linux.

6 replies on “DMP Edubook: Another shot at the mythical $100 netbook”