Android Wear smartwatches are designed to let you view notifications (among other things) by glancing at your wrist without finding and unlocking your phone. But what if you’re in the middle of styling your hair and don’t have time to glance at your wrist? 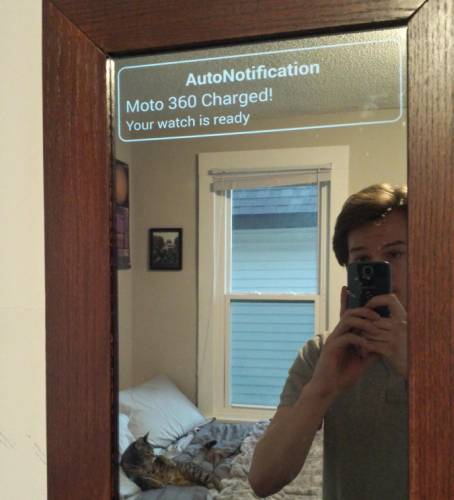 The mirror itself is a sheet of one-way glass over a PC monitor. The smart part comes from an Android phone connected to the monitor with an HDMI cable, although Nothom says he might eventually use a Raspberry Pi mini-computer instead.

The smart mirror an also be used for other things though since it’s hooked up to an Android phone (or eventually a Raspberry Pi). This could theoretically open the door to viewing incoming text messages or other alerts, checking weather forecasts or sports scores, or other functions.

via SlashGear and Nicholas Nothom