This November Nintendo will ship the $60 NES Classic Edition. It’s a tiny replica of the classic Nintendo Entertainment System game console that comes with 30 games pre-loaded… and no way to add or remove any of those games.

Meanwhile, folks have been building their own NES Classic-style devices for years by putting a Raspberry Pi or similar mini PC into an NES-style case and installing RetroPie or other emulation software.

But daftmike’s NES Classic is one of the most impressive I’ve ever seen. 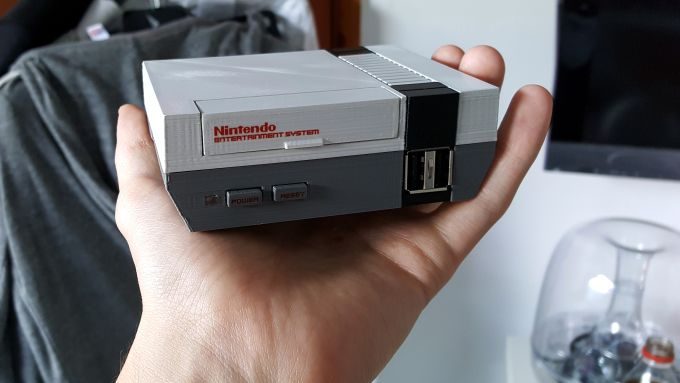 The system includes a Raspberry Pi 2 stuffed into a 3D-printed case that’s about 40 percent the size of a real NES. But that’s just the tip of the iceberg.

Daftmike modified the layout of the Raspberry Pi by moving two of the USB ports so they’d be accessible on the front of the system, while using the other two for internal WiFi and Bluetooth dongles. An Arduino board has been placed in the case and connected to the status light and an NFC card reader.

Wondering why the system needs NFC? Because he’s also created a series of tiny game cartridges that can be inserted into a slot. Unlike actual NES game cartridges, the games aren’t actually installed on these miniature versions. But there are NFC tags that correspond with the pictures on each cartridge, letting RetroPie know which game to load.

So unlike the official NES Classic Edition from Nintendo, this DIY version can run just about any game that works in an emulator… and you can load games pretty much the way you would with a real NES console: just insert a cartridge and then press the power button.

You could also run games developed for GameBoy, Super Nintendo, or other consoles.

There’s also a reset button that you can press once to restart a game, press and hold to power down the system, or double-press to toggle a status light that lets you know if a cartridge is inserted.

For no good reason, daftmike also created a 40-percent-sized NES classic game controller which is too small to really be usable. But you should be able to use a wide variety of USB game controllers.

If you’re wondering if this project was inspired by the upcoming official NES Classic Edition, it wasn’t. Daftmike says he started working on the project weeks before Nintendo announced their new mini-console. But I still think it’s cooler since it’s both homemade and more versatile.

For folks without access to a 3D printer though, Nintendo’s model might be an interesting option. I know a lot of people have expressed interest in buying one just to have an authentic-looking case. It remains to be seen how easy it will be to scoop out its insides and replace them with a Raspberry Pi or other single-board computer.