Intel’s NUC line of computers are compact PCs designed to take up a lot less space than a typical desktop computer… but due to their small size, they typically have the kind of hardware you’d expect from a laptop.

So maybe it’s not surprising that someone decided to build a DIY laptop powered by an NUC. 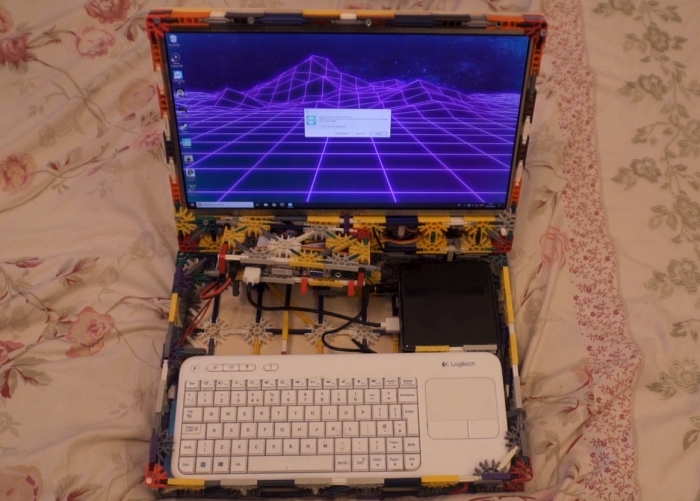 Axel Wolestenholme’s “Completely Modular Intel NUC Laptop” combines a 16 inch display, a 185 Wh battery, an NUC, and an off-the-shelf keyboard… and some plywood.

It’s not the prettiest (or lightest) laptop around — it has an entire Intel NUC NUC8I5INH mini desktop crammed into the DIY case.

But it’s a portable computer that runs on battery power, and as Wolstenholme points out, it’s modular — you can replace the screen, keyboard, or battery. You can open up the NUC to add memory or storage, or replace the NUC with a different mini PC altogether.

He says he chose the NUC8I5INH because its Intel Core i5-8265U processor and AMD Radeon 540X discrete graphics offer better performance than an Intel Bean Canyon NUC (with a Coffee Lake-U processor and Iris Plus graphics), while still consuming only around 40 watts of power.

That means the DIY laptop can run for about 3-4 hours on a charge… when using an enormous battery (that’s too large to pack in checked luggage when boarding a flight in the United States).

Of course, you could probably get away with using a smaller battery if you opted for a less powerful mini PC. We’ve seen plenty of DIY laptops made from Raspberry Pi computers over the years — including models small enough to fit in your pocket and run off a small USB power bank.

You can find more details about Wolstenholme DIY modular laptop (along with some of its pros and cons) in the 11 minute video below: