The Smart Response XE is a simple handheld device that was designed for use in classroom settings (teachers could send questions to students over a local wireless network and then collect responses). It was discontinued years ago, but hardware and software hackers have been picking up user devices on eBay and finding new uses for the old hardware.

One interesting project? Hacker chmodd775 has turned the Smart Response XE into a handheld Linux terminal by giving the little device new brains, but keeping the keyboard and display. 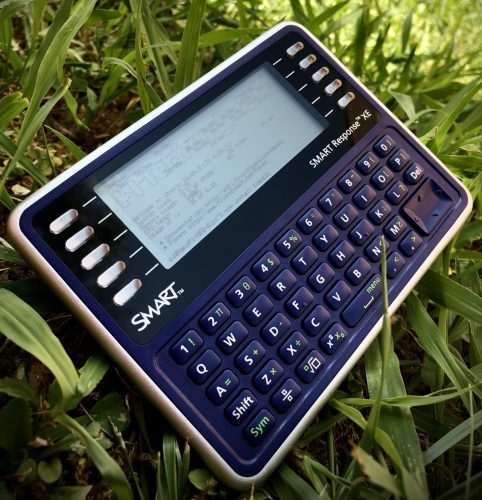 It’s a pretty basic device that normally runs on 4 AAA batteries and which is designed for classroom use – the device communicates with a receiver plugged into a teacher’s computer, and Smart Technologies sold the Smart Response XE in 24-packs, 32-packs, and 30-packs.

The clicker is powered by an Arduino-compatible ATMega128RFA1 microcontroller with an 8-bit CPU and very limited RAM and storage. It’s not really enough to run Linux or other full-featured operating systems (although folks have figured out how to run old-school software like BASIC on the Smart Response XE).

But chmod775 figured out that he could fit a small single-board computer in the battery compartment and then run a VT100 terminal emulator on the ATMega microcontroller to communicate with that single-board computer (and then find a battery small enough to fit in the remaining space which could provide power to both the SBC and the handheld computer – the current solution runs for about 3 hours on a charge).

Theoretically a Raspberry Pi Zero W or any other single-board computer small enough to fit in the battery area should work, but this particular hack was done with a NanoPi Neo Air.

Is this device actually useful in any way? That’s probably up for debate. But it’s pretty cool.

Source code and schematics should be available at GitHub soon for folks that want to try their hand at making their own Smart Response XE Linux terminal device. For now you can see the finished product in action in a (very) short video.

via Tom’s Hardware and HackADay