When Google Reader shut down in 2013, a bunch of companies tried to present themselves as viable alternatives. That included some new players like Inoreader, Feedly, The Old Reader, and Newsblur as well as some older names including Aol and Digg.

But Aol Reader shut down a few months ago, and now it looks like Digg Reader is following suit. The service is shutting down on March 26, 2018. Users can export their feeds and folders as an OPML file until that date. 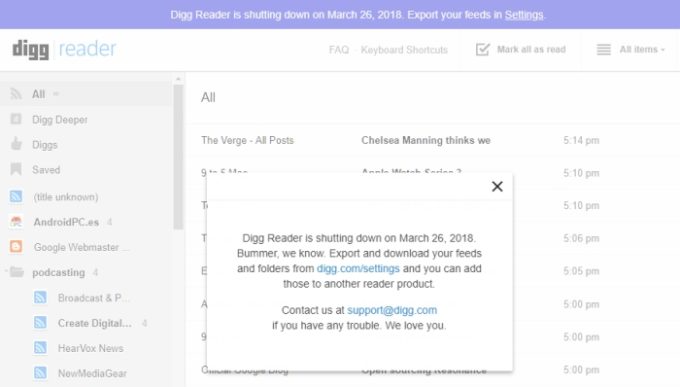 Digg Reader is/was a simple, but functional replacement for Google Reader, but it didn’t really offer any new or innovative features. Its main claim to fame was probably that it was free and allowed you to import your feeds from Google Reader.

It also may have a bit of name recognition for long-time denizens of the internet. Digg was kind of reddit before reddit was reddit. It started as a social news site that allowed users to vote for or against stories so that the most popular articles would appear on the main page.

But Digg’s technology was sold off in 2012 and as reddit rose to popularity by embracing a million subreddits and sticking with a super-simple design, Digg changed tactics and became a simple news aggregation website.

Digg’s homepage is still just that. It’s only Digg Reader that’s shutting down.

The moral of this story? Your best chance of finding a cloud-based RSS service that’ll stick around is probably to find a company that only offers an RSS service and which has a business plan (including premium and/or freemium features). Or maybe just host your own.

I know not everyone uses RSS these days, but as a blogger, I still find it an incredibly useful tool for sifting through updates from hundreds of websites every day. I paid for a Feedly lifetime subscription when that was an option, and I’ve more than gotten my money’s worth out of it over the past few years.

There are certainly cheaper options, including just using a desktop or mobile RSS client. But I like the cross-platform nature of a cloud-based solution like Feedly, which allows me to save items on my phone and view them on my desktop or vice versa or to just pick up scanning through headlines on one device where I left off on another.

Personally, I’m just happy that there seem to be some decent options these days. When Google announced that it was shutting down Reader, I was very worried. Now I’m pretty sure that even if Feedly were to shut down tomorrow (please don’t!) I’d be able to switch to another RSS reader in a matter of minutes by exporting my feeds from Feedly and importing them to a different app or service.

What about you? Are you still using an RSS reader in 2018? What’s your preferred method for getting news from multiple sources?