There’s more evidence that Google Android 4.3 Jelly Bean could be coming soon… as well as an updated version of the Google Nexus 7 tablet.

While Google hasn’t yet announced either product yet, a Nexus 4 smartphone running Android 4.3 showed up in Thailand last week, and a new version of the Nexus 7 tablet made a brief appearance in a Google promotional video for Google Hangouts a few weeks ago.

Now Japanese site Ameblo spotted an updated Nexus 7 tablet at the Bluetooth SIG website, suggesting that a new version could be on the way. 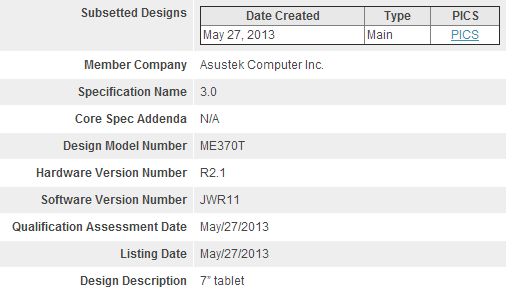 According to the Bluetooth website, the tablet is an Asus ME370T 7 inch tablet. That’s the same model number as the Nexus 7 tablet which launched in 2012.

But the new model is running software version JWR11, a build of Android which Google hasn’t yet released — and that’s probably Android 4.3 Jelly Bean.

Just about the only thing we know (almost) for certain is that the next version of Android will include a redesigned camera app which brings the menu buttons a little closer to the shutter button. Somehow I suspect there will be a few other changes though.

It’s likely that a next-generation Nexus 7 tablet will have a higher resolution display, a new processor, or some other hardware changes — the Hangouts promo video showed a model with a notification light. But since the tablet that just scored Bluetooth certification has the same model number as the 2012 version it’s likely it’s the same tablet — but running new software.

9 replies on “Did a Google Nexus 7 with Android 4.3 just get Bluetooth certification?”