Last summer the folks at ClockworkPi launched a portable computer with modern hardware, but a retro-inspired design. The DevTerm features a 6.86 inch, 1280 x 480 pixel IPS LCD display, a keyboard that looks lie it was pulled from a typewriter or word processor, and a modular design that lets you choose from a handful of different processors.

At the time that meant you had a choice of five different-ARM-based chips. But now there’s a new model called the DevTerm R-01 which is powered by a RISC-V processor. 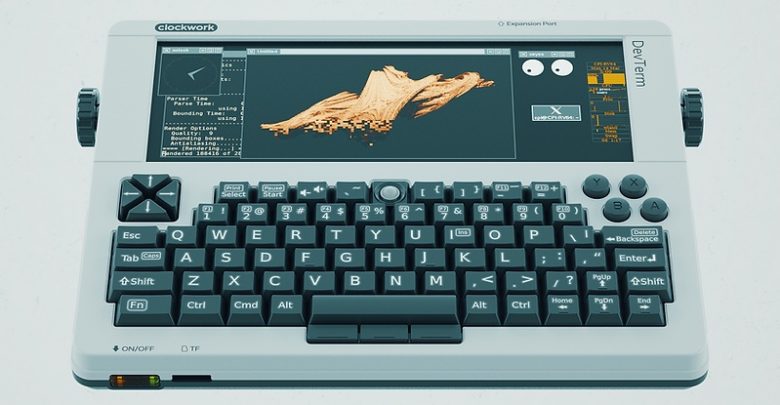 The new DevTerm R-01 looks virtually identical to the ARM-based models on the outside. But under the hood it’s powered by a new R-01 Core module featuring a 64-bit, 1 GHz single-core RV64IMAFDCVU processor and 1GB of RAM.

It’s not exactly a powerhouse. There’s not even an integrated GPU for hardware-accelerated graphics. But RISC-V processors have been picking up steam in the past few years as an alternative to x86, ARM, and other proprietary architectures, since RISC-V uses an open instruction set architecture that’s available under open source and royalty-free licenses. 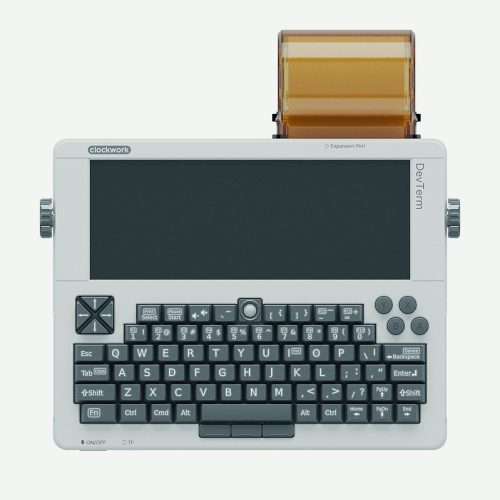 Since the DevTerm is already aimed at open source software and open hardware enthusiasts, it makes sense that at least some of the folks interested in buying one might also be interested in sacrificing a bit of horsepower to get their hands on a model with a RISC-V processor.

ClockworkPi does warn that the R-01 model is “highly experimental” and “requires some experience with Linux systems & FOSS,” so the company recommends folks looking for something a little easier might want to pick up an ARM-powered DevTerm A04 or A06 kit instead.

The company is selling the DevTerm R-01 as a kit for $239. Some assembly is required, but what you get for that price is a portable computer with a widescreen IPS LCD display, a 65% sized keyboard, dual speakers, a 32GB microSD card with clockworkOS pre-installed, and a small thermal printer. There’s also a battery module, but you’ll need to buy your own 18650 batteries if you want to actually use the DevTerm R-01 on the go.