The DevTerm is a portable terminal with a retro-inspired design, an ultra-wide display, and a modular design that lets you swap out processor modules. Originally designed to support either a custom dual or quad-core ARM Cortex-A53 processor module or a Raspberry Pi Compute Module 3, the developers at Clockwork later released a version with support for a RISC-V processor module.

Now the company is offering another option that brings more horsepower to the DevTerm: support for a Raspberry Pi Compute Module 4. But despite the fact that Raspberry Pi’s latest Compute Module is a different size and shape than its predecessor, you don’t need to buy a whole new DevTerm to use the CM4. You just need a $19 adapter board. 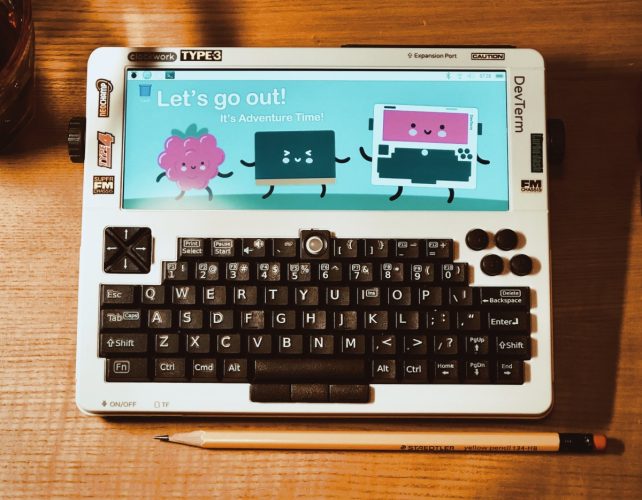 Just connect the Raspberry Pi CM4 to the adapter and you can slide it into the original DevTerm using the SODIMM-style connectors.

The Raspberry Pi Compute Module 4 features a 1.5 GHz Broadcom BCM2711 quad-core ARM Cortex-A72 processor, up to 8GB of RAM, and up to 32GB of eMMC storage (which is an optional feature that isn’t included on all modules). There’s also optional support for WiFi 6 and Bluetooth 5.0. 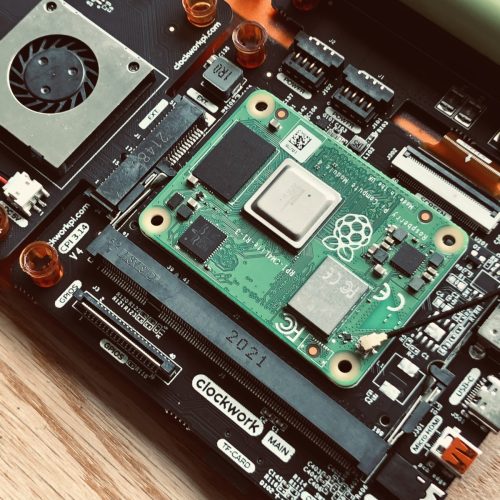 Clockwork’s CM4 adapter kit for the DevTerm also comes with a heat sink and a WiFi gain antenna, but the company notes that you’ll need to supply your own Raspberry Pi Compute Module 4 unit and that if you’re using one with eMMC storage you’ll probably want one with at least 8GB of storage since you won’t be able to use the DevTerm’s SD card reader with a CM4 that has eMMC storage.

With a simple adapter board, we can make the #DevTerm immediately compatible with the #CM4. CM4 is so GREAT, for me it’s not much different from a desktop PC already. 💪😃#clockworkpi #RaspberryPi pic.twitter.com/wuezroU1Xx

DevTerm kits are available from the ClockworkPi shop for $239 and up. The company also sells just the ClockworkPi v3.14 mainboard (which is at the heart of the DevTerm) for $39 and up. The new adapter also works with the mainboard, which means that for $39 + $19 + the price of a Raspberry Pi Compute Module 4, you could build your own computer system. Or you could just buy a regular Raspberry Pi, I guess.