The DevTerm is a portable computer terminal with a retro-inspired design featuring an ultra-wide display, a keyboard and trackball, and a modular design that allows the same computer shell to be used with a variety of different processor modules.

When the DevTerm first launched in 2021 it was available with a choice of a Raspberry Pi Compute Module 3 or or several other custom computer-on-a-module solutions. But this year the company expanded its offerings by introducing a RISC-V model. And now you can buy a DevTerm with a Raspberry Pi Computer Module 4. 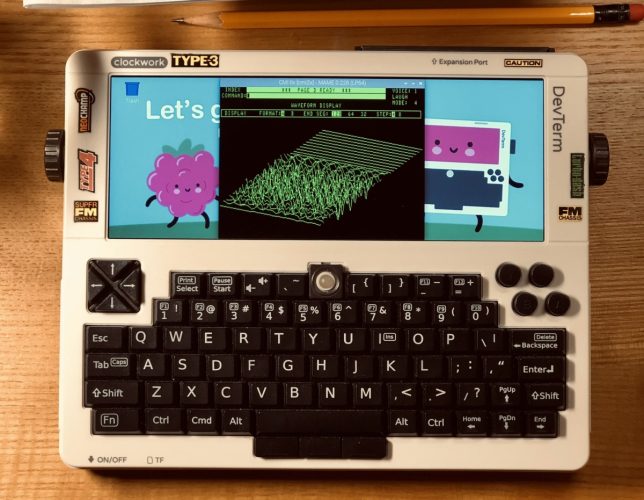 On the outside, the new model looks identical to the others. It has the same 6.86 inch, 1280 x 480 pixel IPS LCD display (which is like two VGA screens placed side-by-side). It has the same 65% sized keyboard with 67 keys, a mini trackball, gamepad arrow keys, and X, Y, B, and A game buttons. And it’s designed to run on 18650 batteries, although you’ll need to buy those separately.

What’s new is that the latest model is powered by a Raspberry Pi CM4 Lite featuring a quad-core ARM Cortex-A72 processor, 4GB of RAM, support for WiFi 5 and Bluetooth 5.0.

Not only does that make this one of the most powerful DevTerm configurations to date, but it also means that you should be able to run a wide range of Raspberry Pi-compatible applications on the system thanks to the strong ecosystem around Raspberry Pi computers.

Technically this isn’t the first time the makers of the DevTerm have offered Raspberry Pi CM4 support. This summer they introduced a $19 adapter board that allowed you to use a Raspberry Pi Compute Module 4 in a DevTerm designed for use with a CM3. But now you don’t need to purchase that board separately, as it’s sold as part of the complete DevTerm CM4 kit.