The first developer preview of Android P was released yesterday, but it’s only available for Google Pixel phones and Google describes it as an early, buggy build that you probably don’t want to use on your primary smartphone.

But if you want to get a taste of some upcoming Android P features without actually installing the pre-release operating system on your phone, the folks at xda-developers have you covered.

They’ve already ported two of the apps from the Android P developer preview to run on phones running older versions of Android. 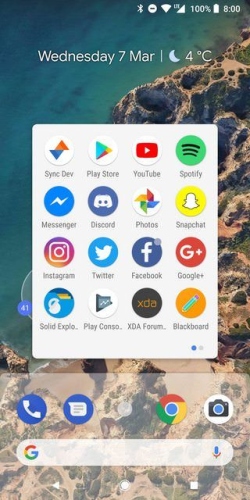 The new Pixel Launcher is… a lot like the old Pixel Launcher. The key differences are that the dock at the bottom of the screen instead of completely transparent, and there’s a microphone icon in the search box, allowing you to start a voice search more quickly.

While the Pixel Launcher is officially a feature that’s exclusive to Google’s Pixel and Pixel 2 series phones, third-party developers have been offering ports for a while that allow you to run it on other devices. This latest port could also come in handy for Pixel users that just don’t want to risk installing Android P.

Taking a screenshot on Android is as simple as hitting a few buttons (usually the power and volume down keys). But once you save that picture, you usually need to fire up a different app if you want to crop, resize, or otherwise edit it.

Android P includes a few updates affecting screenshots. The first is that you can now press-and-hold the power button and see a screenshot button in the pop-up power menu (which means you don’t need two hands or fingers to save a screenshot anymore).

The second is that after taking a screenshot, there’s a new “edit” option that opens a new Google app called Markup.

It makes it easy to crop, rotate, or, well… mark up an image by drawing or writing notes. You can choose from several different color options and there’s a marker and a highlighter option.

This port allows you to install Markup on devices running Android 8.1 or earlier, but it won’t add the “edit” button to the notification tray. Instead you’ll have to choose “share,” then select Markup from the Android share menu.

While Markup and the Pixel Launcher are the first Android P apps ported to run on non-Android P/non-Pixel devices, I wouldn’t be surprised to see the list grow. You can keep an eye out for any additional ports at the xda-developers forum’s Android Apps and Games subforum.