OnePlus plans to introduce their first smartphone on April 23rd, but the company’s generated a lot of buzz by promising high quality hardware at an affordable price. It doesn’t hurt that OnePlus is led by Pete Lau, a former executive at Chinese smartphone maker Oppo.

Ahead of the official launch, we already have a good idea of the price, specs, and even what kind of photos you can take with the camera on the upcoming OnePlus One smartphone. Now OnePlus is providing a look at the custom version of CyanogenMod software for the phone… and if that isn’t enough, some images of the handset have leaked.

As promised, it looks like the phone has a very large display and a very small bezel around the screen, which explains how OnePlus managed to squeeze a 5.5 inch display into a phone the size of a typical 5 inch smartphone.

The OnePlus One reportedly measures about 6″ x 3″ x 0.35″ and weighs about 5.6 ounces. It has a shape that’s reminiscent of an Oppo Find 7, with a nearly rectangular design softened by slightly curved edges.

OnePlus will also offer accessories including a range of “StyleSwap” rear covers which you can use to change the look of the phone, and a few other items which you can see at Android Authority. We should learn more about these accessories on the 23rd.

The phone will also be the first device to ship with CyanogenMod 11S software. The CyanogenMod team started out as a group of hobbyists working on custom versions of Android with performance tweaks and user customization options. Last year a group of core developers founded Cyanogen Inc and started reaching out to device makers. 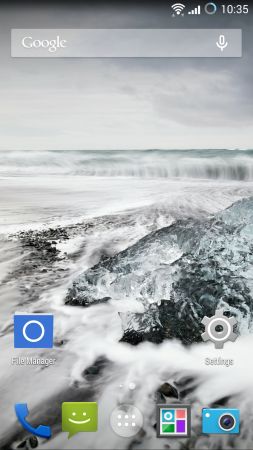 A limited edition of the Oppo N1 came with Cyanogen software. But the OnePlus One is the first phone designed specifically to work with CyanogenMod — and the Cyanogen team has created a custom user interface with a lock screen, theme engine, custom fonts, and more.

The software also includes Cyanogen’s suite of apps including a file manager, camera, and gallery to replace the stock Android apps — although the OnePlus One will be compatible with the Google Play Store and other Google apps.

via Phandroid and OnePlus BBS

8 replies on “More details: OnePlus One with CyanogenMod 11S”