Microsoft has been providing tools that let developers convert desktop/Win32 apps into Windows Store apps… and now the first of those apps are starting to show up in Microsoft’s app store.

Some of the first of those apps include Evernote, Double Twist, MAGIX Movie Edit Pro, and Arduino IDE. Note that you’ll need to be running Windows 10 Anniversary Updated to install the latest versions of those apps. 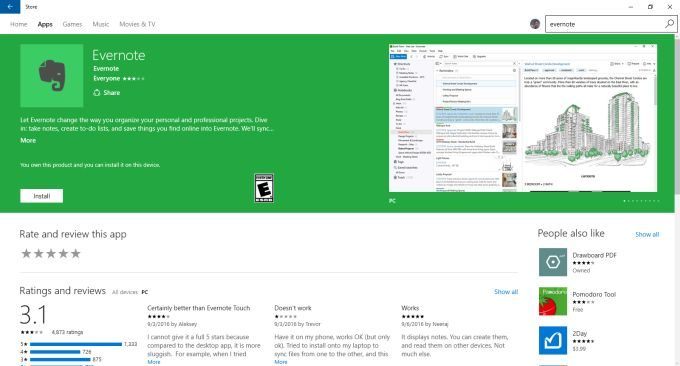 Developers can use Microsoft’s Desktop Bridge (formerly known as Project Centennial) tools to turn existing desktop applications into Universal Windows Platform apps. There are a few key advantages for users and developers: software can be downloaded and updated from a central location, users can using a single billing account for multiple apps, and software runs in a sandboxed environment that helps make the process of installing software on a Windows PC a bit safer.

Universal Windows apps can also tap into Windows 10 features including Live Tiles, Cortana, and Action Center. And as the name suggests, Universal Windows Platform apps can also run on a range of devices including PCs, phones, HoloLens, and Xbox One… although not all desktop apps will work with all of those platforms, since some might continue to use some legacy code which isn’t able to run in each of those environments.

Not everyone is happy about Microsoft’s push to get developers to adopt the Universal Windows Platform. Earlier this year Epic Games co-founder opined that Microsoft was trying to create a locked-down, “walled garden” platform that gives the company too much control over the software that can run on Windows computers (not to mention the ability to take a cut of revenue from software and subscription sales).