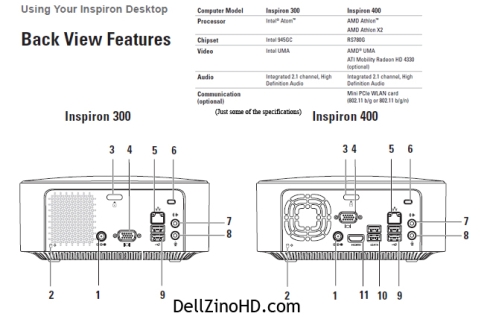 A few months ago details (or rather, photos) started appearing of a mysterious Dell computer that looks to be about the same size as a Mac Mini. Called the Dell Zino HD, it sported an optical disc drive, HDMI output, and unknown specs. While Dell still hasn’t made any official announcements about the product yet, it looks like there’s some more information available now. DellZinoHD.com uncovered a few support documents that seem to layout the specs for the computer formerly known as the Dell Zino HD.

The Dell Zino HD appears to have been rebranded the Inspiron 400. And it’s certainly more Mac Mini than nettop. It sports either an AMD Athlon or Athlon X2 procesor, up to 8GB of RAM, Ethernet, 2 eSATA ports, WiFI, a Super Multi Drive with a Blu-ray option, and ATI Mobility Radeon 4330 graphics. It will also have VGA and HDMI outputs. No word on pricing.

But it looks like Dell also has a cheaper version in the works. The Inspiron Mini 300 will have the same basic case design, but it will sport your usual nettop specs including an Intel Atom processor, integrated GMA graphics, 1GB of RAM, and VGA, USB, and audio ports. No HDMI and no HD capabilities. In other words, I don’t think it’s likely that this model will wear the “Zino HD” name.

There’s no word on pricing or availability for either model yet.