The Dell XPS 12 is a 2-in-1 tablet with a 12.5 inch display, a low-power Intel Core M Skylake processor, and a detachable keyboard dock that lets you use the notebook like a laptop.

It’s a design that’s becoming increasingly common, but Dell’s tablet has a few unusual features going for it. First, the tablet has a full-sized, sturdy keyboard dock that feels like something you’d expect from a full-fledged notebook. Second, the computer has a fanless design. Third, there’s an optional 4K display.

The Dell XPS 12 will be available starting November 5th for $999 and up. 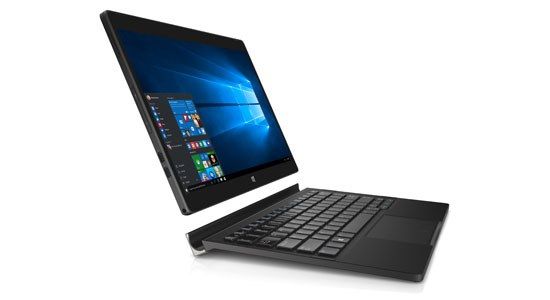 Unlike some 2-in-1 tablets, the base price includes both the tablet and the keyboard, which connects to the tablet via a strong magnet. Unfortunately it looks like you can’t adjust the angle of the screen once it’s docked to the keyboard.

There’s also one key accessory that’s not included: a pen. Dell does sell an active pen that you can use to write or draw on the tablet, but you’ll have to buy it separately.

The tablet weighs about 1.75 pounds, while the tablet and keyboard combine to make a 2.8 pound notebook.

Other features include two Thunderbolt 3 ports (with USB Type-C connectors), an 8MP rear camera, and a 5MP front camera. If leaked details we spotted earlier this month are accurate, we can also expect the tablet to feature 802.11ac WiFi, Bluetooth 4.0, and a 30 Whr battery.

via The Verge, Dell, and TechWeez