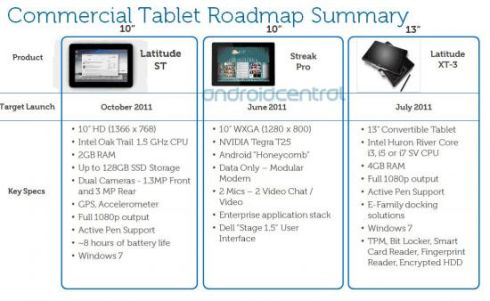 The folks at Android Central have obtained a document showing more details about Dell’s upcoming tablet computers. We already knew that Dell was working on 10 inch tablets running Windows and Android. Now we have names and specs.

The Android tablet will be the Dell Streak Pro, and it will look a lot like every other 10 inch Android tablet, complete with a 1280 x 800 pixel display and dual core NVIDIA Tegra 2 processor. The good news is that’s a big step up from the company’s 7 inch tablet which runs Android 2.2 and has a low resolution 800 x 480 pixel display. The news I can’t really rule good or bad yet is the fact that the Dell Streak Pro will use an updated version of Dell’s “Stage” software called Stage 1.5.

The Dell Streak Pro will also have not just two cameras, but also two microphones. It will be a WiFi-only model, with a modular modem for mobile broadband access.

According to the leaked document, the Streak Pro should ship in June. There’s no word on the price.

Next up we have the Dell Latitude ST, a 10 inch Windows tablet. This model will reportedly have a 1.5 GHz Intel Atom Z670 Oak Trail processor and a 1366 x 768 pixel HD display.

The Dell Latitude ST is due out in October. There’s no indication of a price for this model either, but Dell tends to reserve the Latitude brand name for its computers for business and education customers, so I wouldn’t necessarily expect it to be as cheap as it would be under the Dell Inspiron brand.

The slide also shows a new 13 inch Latitude XT-3 convertible tablet which is due out in July.