Dell’s pocket-sized thin client device could be ready to ship soon. The company has been showing off its Project Ophelia device since January, and now the tiny PC-on-a-stick has passed through the FCC on its way to an official launch.

Basically the little device has the guts of a cheap ARM-based computer running Google Android, but Dell’s not really positioning it as a standalone device. Instead, Dell is bundling it with the company’s Wyse software which lets you log into and control remote software using Citrix, VMWare, or other virtualization and remote desktop solutions.

In other words, plug the little Wyse Cloud Client into your TV or monitor, connect a mouse and/or keyboard, and you can use full-blown Windows apps (which are actually running on a remote server). It’s more of a tool for enterprise customers than home users. 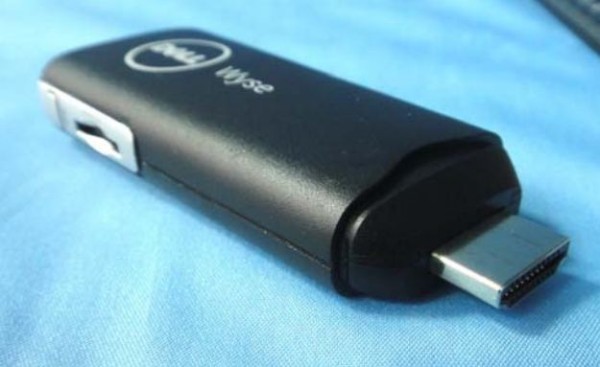 That said, the Dell Wyse Cloud Client stick is one of the first devices of its type that we’ve seen from a major US computer maker. While Chinese companies such as Rikomagic and Tronsmart have been cranking out similar hardware since early 2012, it’s interesting to see Dell getting in on the action which a specialized version.

If you really wanted to, you could also use the Wyse Cloud Client as a standalone device capable of running Android apps including a web browser, office software, and other apps designed for phones and tablets.

Dell hasn’t said anything about the processor, memory, storage, or other specs on this device, but according to the FCC documents it looks like the Wyse Cloud Connect features WiFi and Bluetooth, has an HDMI connector, a mini USB host port, a micro USB OTG port, and a microSD card slot.

There’s a physical button you can press for Bluetooth pairing. You can connect the device to a TV with the HDMI connector and use a separate USB cable to supply power. Or if you have a display that supports MHL, you can just use a single MHL cable which supplies power to the Cloud Connect while it sends video to your display.

There’s also a wrist-strap slot, suggesting Dell envisions a situation where employees might carry this pocket-sized thin client around throughout their work day.