All-in-one computers have been around for a few years – Apple arguably invented the space with the first iMac in 1998. All-in-ones typically combine the guts of a computer and the display into a single package, sometimes even adding a touchscreen for good measure.

Now we’re starting to see companies take the concept a little further by adding batteries that let you pick up your desktop PC and carry it around like a tablet. 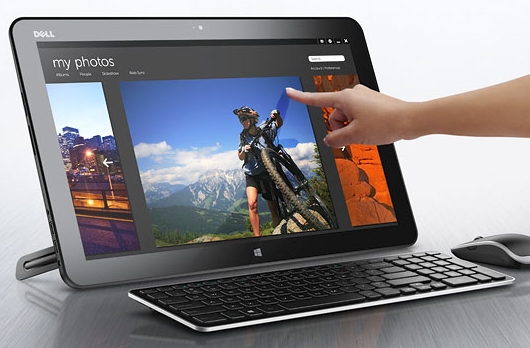 The entry-level Dell XPS 18 features a 1920 x 1080 pixel display, and an Intel Pentium ULV dual-core processor. If you’re willing to pay extra you can trick out the XPS 18 with specs including an Intel Core i7 processor, up to a 512GB solid state disk, and up to 8GB of RAM.

Dell’s XPS 18 isn’t the first all-in-one desktop that can also be used as a tablet. But it’s one of the most portable. The Sony Vaio Tap20, for instance, is about the same size and shape — but it weighs more than 11 pounds. The Dell XPS 18 weighs just under 5.

Asus also has an 18 inch all-in-one that can be used as a tablet… but the Asus Transformer AiO is actually a two-piece machine. There’s a desktop station which runs Windows software and a detachable 18 inch tablet display which runs Android. The Asus model has a relatively hefty starting price of $1200.

So the Dell XPS 18 appears to be the most affordable, portable device in its class… at least until the next portable all-in-one desktop comes along.

Now I guess we get to see whether anyone really wants or needs this type of computer, or if most PC buyers would rather just buy a cheap laptop or desktop and spend the money they save on a tablet that weighs less than 2 pounds and offers even longer battery life.

8 replies on “Dell XPS 18 takes all-in-one to next level: This desktop is a tablet”