Dell is expanding its XPS 13 line of thin and light computers with the first 2-in-1 model to ship with a tablet form factor and support for a detachable keyboard. When it hits the street this summer the new Dell XPS 13 (9315 2n1) will come with a 13 inch tablet with a high-res display, support for pen and finger touch input, and an Intel Alder Lake-U processor.

It will join the new Dell XPS 13 (9315) clamshell-style notebook that has similar specs, as well as the Dell XPS 13 Plus, a recently-launched notebook with more powerful processor options. But it’s not just the detachable keyboard that makes Dell’s new tablet stand out from other members of the XPS 13 family. 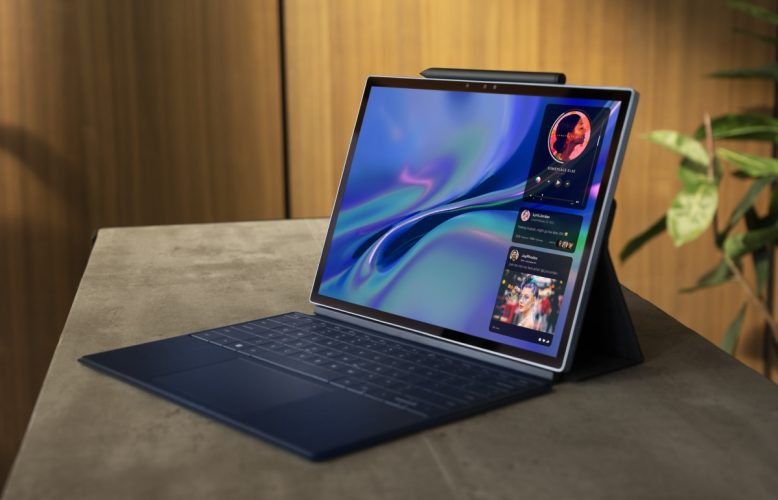 Dell has offered 2-in-1 XPS laptops before, but they’ve typically been notebooks with touchscreen displays and 360-degree hinges that allow you to hide the keyboard behind the display for use in tablet mode.

The new model’s detachable keyboard design makes this year’s model easier to pick up and hold in your hands since it’s the thinnest and lightest XPS 13 to date (at least when you’re not using it with a keyboard).

And since you’re more likely to pick it up, this model has something you don’t usually find on a laptop – a rear camera. Dell equipped the notebook with an 11MP world-facing camera for snapping photos or shooting video as well as a 5MP front-facing camera and 0.3MP IR camera for face recognition. Unfortunately that keyboard isn’t included in the base price of the tablet, you’ll have to pay extra for it. Also sold separately? The XPS Stylus, which is an active pen used for writing, drawing, and otherwise interacting with the tablet.

There is one more optional feature that sets this model apart though – support for a 5G modem with support for all major US wireless networks.

Here’s an overview of key specs for the new 2-in-1 tablet:

If you opt for a WiFi-only version of the tablet you’ll get a sky blue model that measures 0.29 inches thick and which weighs about 1.6 pounds. Models with 5G support are slate grey and measure 0.31 inches thick and weigh 1.8 pounds.

Since the folio keyboard weighs about 1.23 pounds, the combined weight of the tablet and keyboard ranges from 2.83 to 3.03 pounds, making the XPS 13 2-in-1 a little heavier than the 2.59 pound clamshell model if you think of this as a laptop. The keyboard has a built-in kickstand that can be adjusted to prop up the tablet at 110, 112.5 or 125 degree angles, and there’s a magnetic section along the top edge of the tablet that can be used to both hold the optional XPS Pen in place and charge the pen.

If all of this sounds familiar, by the way, that’s because details about the 2-in-1 tablet first leaked in May.

Pricing information should be available closer to launch.