Dell’s XPS 13 laptops have earned a reputation for a few things over the years. They’re incredibly thin and light. Despite that, they get surprisingly long battery life and offer generally decent performance. And for years, Dell has offered XPS laptops with ridiculously thin top and side bezels by moving the webcam to an awkward position — below the screen.

That leads to some unflattering up-the-nose shots when engaging in video calls… or worse.

This year Dell is introducing a new design for its XPS 13. The updated model is still thin, light, and more powerful than ever — Dell is upgrading the processor to Intel’s 8th-gen “Whiskey Lake” processors. But the display has been improved, there’s a new color option for the lid, and the camera is back above the screen.

The new Dell XPS 13 with Whiskey Lake is available starting today for $900 and up. 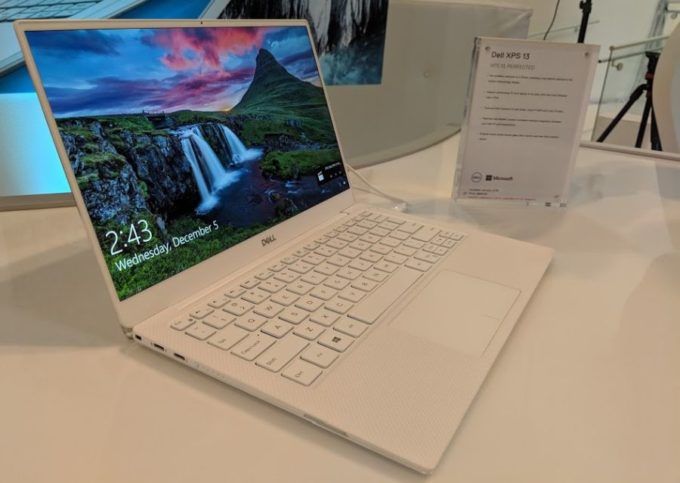 Dell says it shrunk its camera module from 7mm to 2.25mm to make that possible. The bezel above the screen is about 0.5mm thicker than in previous versions, but it’s still pretty slim — if you’re the sort of person who puts tape over your laptop camera, you’ll need a pretty tiny sliver of tape if you don’t want to also cover part of the screen.

The new XPS 13 9380 will eventually replace last year’s 9370 series in the company’s lineup, although the company will sell both models for at least a while.

But since Dell will sell these new models with Whiskey Lake chips instead of Kaby Lake-R processors, you should see up to a 10 percent performance boost and you’ll get Gigabit WiFi support if you opt for one of the new models.

Other changes in the new Dell XPS 13 include displays with 100% sRGB color gamut and support for support for Dolby Cinema 2.0 and Dolby Vision HDR.

Dell says the battery hasn’t changed, but the new laptops get slightly longer battery life thanks to the new display panels and some software adjustments.

There’s also a new variable torque hinge that makes the laptop easier to open with one hand. When you reach to lift the lid, is should move easily even if you’re not using your other hand to hold the bottom of the laptop down. But as the screen approaches a 90 degree angle to the keyboard, the hinge gets a little stiffer to prevent the screen from wobbling while you’re using the laptop.

Finally, Dell now offers three color options. You can still choose an all black model or a model with a rose gold lid and alpine white woven glass fiber palm rest. But there’s also now an arctic white lid option for folks that want the white interior but don’t want rose gold on the outside.

The Dell XPS 13 with Whiskey Lake will is available with up to an Intel Core i7-8565U processor, up to 16GB of RAM, up to 2TB of PCIe SSD storage, and up to a 4K touchscreen display.

4 replies on “Dell XPS 13 laptop gets a 2019 refresh: Whiskey Lake chips, camera above the screen”