The last time Dell offered a 2-in-1 device called the XPS 12, it was a convertible notebook with a 12.5 inch touchscreen display that could rotate 180 degrees, allowing you to fold down the lid and hold the laptop like a tablet.

Now it looks like Dell is reviving the XPS 12 name… but this time the company plans to offer a 12 inch tablet with a detachable keyboard dock. According to leaked information obtained by German site Giga, the new XPS 12 will have also have a 4K display and support for digital pen input. 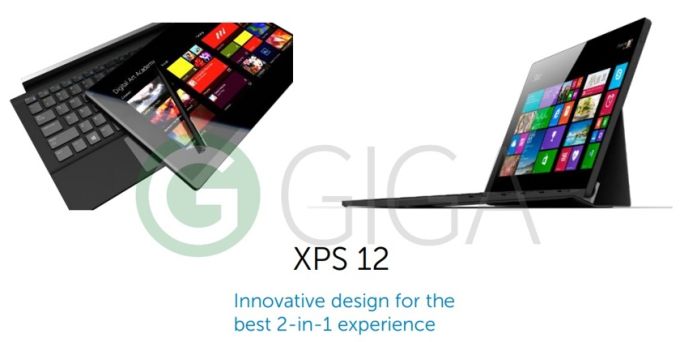 Giga reports that the upcoming XPS 12 features a 12 inch, 3840 x 2160 pixel display and that it’s an “Infinity” display much like the screen on the Dell XPS 13 ultrabook. That means the bezels around the edges of the display will be super slim.

Other features are expected to include a Thunderbolt 3 port with a USB Type-C connector, an 8MP rear camera, a 5MP front camera, and a detachable keyboard dock with backlit keys and a touchpad. A magnetic locking mechanism holds the keyboard and tablet together when you want to use the computer as a notebook.

The Dell XPS 12 is expected to ship with Windows 10 and support a Dell Active Stylus for pressure-sensitive input when writing or drawing on the screen.

Dell is also expected to offer an optional desktop dock.

Pricing hasn’t been announced for the new XPS 12 yet, and we don’t know how much memory or RAM it has or what processor it uses — although I’d expect it to feature a 6th-gen Core M Skylake or faster processor.

If Giga is correct, we should know more by October. That’s when the new XPS 12 is expected to launch.