It looks like the Dell Latitude 10 isn’t the only Windows 8 tablet Dell is working on. The folks at Neowin got another leaked product slide — this time showing a tablet that converts into a notebook called the Dell XPS 12. 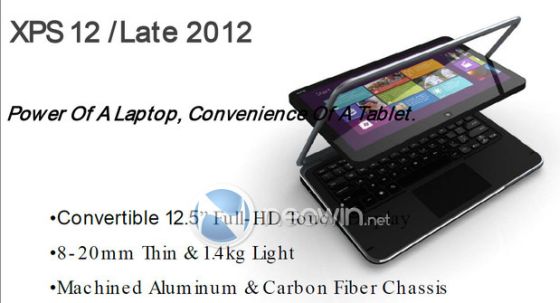 The XPS 12 reportedly features a 12.5 inch display and a thin and light design with a case that’s 0.79 inches thick. The computer weighs just 3.1 pounds thanks to a light weight aluminum and carbon fiber case.

In other words, while the XPS 12 can function as a tablet, I wouldn’t be surprised to see Dell market the computer as an ultrabook. Some of the details in the slide, such as “Intel Smart Connect” and “Rapid Start” technology sure make it sound like the computer will have an Ivy Bridge processor and solid state disk — two of Intel’s requirements for ultrabooks.

Dell’s current line of ultrabooks are also sold under the XPS brand.

The Dell XP 12 will feature a sturdy Gorilla Glass display and a mechanism for converting from tablet to notebook mode that looks a lot like the one used in the discontinued Dell Inspiron Duo netbook.

Instead of attaching the screen to the base with a swivel, Dell rests the screen inside a larger shell. That way you can open the notebook lid, push back on the screen until it rotates 180 degrees, and then simply close the lid down over the keyboard to use the notebook like a tablet.

Keep in mind, this leaked product slide could be inaccurate or even fake. But the XPS 12 certainly looks like the kind of Windows 8 device I would expect Dell to release later this year.

4 replies on “Dell XPS 12 convertible Windows 8 tablet on the way?”