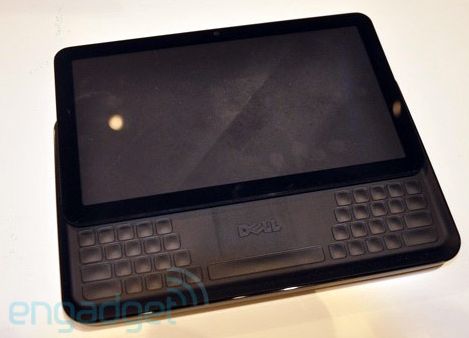 Dell has already released 5 and 7 inch Android tablets and announced plans to bring 10 inch Windows and Android slates to market. But it looks like Dell has something else up its sleeve as well. Engadget received a series of photos showing a 7 inch tablet with a slide-out keyboard.

What’s interesting is that unlike the Asus Eee Pad Slider and Samsung Series 7, Dell’s slide-out keyboard doesn’t appear to fold in a way that would allow you to use the device like a laptop. Instead, you would hold it and type with our thumbs. Don’t relish the idea of reaching your thumbs all the way across a 7 inch screen? Dell’s already thought of that. The tablet has a split keyboard with half the keys on the left, the other half on the right and a big empty spot in the middle.

Engadget doesn’t have any other information about the hardware or software running on the tablet. We could be looking at a Windows 8 prototype, or it could be an Android tablet. It might have an Intel Atom chip or an ARM-based processor. Or it could just be a prototype that will never see the light of day. But it’s definitely something a little different from the other 7 and 10 inch tablets on the market right now.