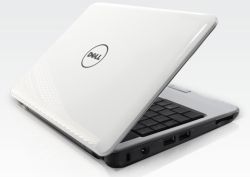 Dell isn’t making a big deal out of the fact that the newly launched Inspiron Mini 9 laptop will support 3G wireless networks. But it will. Dell Senior Product Line Manager John New tells Laptop Magazine that by the end of the year the company will launch a version of the Inspiron Mini with a 3G modem. It’s possible this device could be sold by US mobile carriers who may even subsidize the price of the device by locking customers into wireless contract.

While I’d read early reports saying the Inspiron Mini would support WiMax, New says Dell has no plans to add WiMax support at the moment.

One other interesting revelation is that Dell currently has no plans to release a higher capacity battery for the Inspiron Mini 9. The included 4 cell battery is a bit more powerful than the 3 cell batteries shipping with most netbooks. And it appears that you can get a good 3 to 3.5 hours of battery life out of it. So while Dell may eventually produce a 6 cell or larger battery, right now the company plans to stick with the cheaper 4 cell model.