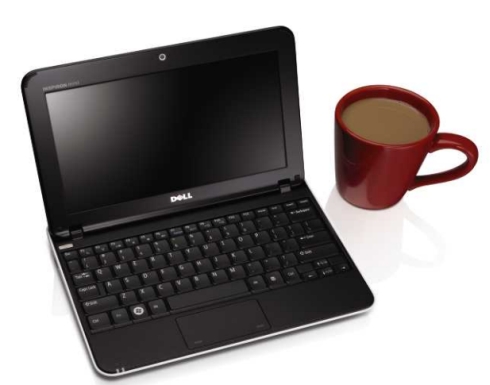 Dell is introducing an update to its Inspiron Mini 10 netbook series. The new version will replace both the current Inspiron Mini 10 with an Atom Z520 CPU and the Mini 10v which has an Atom N270 CPU. Instead, the new model will have an Intel Atom N450 processor. The new model will be available for $299 and up in the US starting January 5th. It will be available globally two days later on January 7th.

The launch model will ship with Windows 7 Starter Edition or Windows XP Home. Ubuntu 9.04 Linux will also be available, but not until February.

Dell has given the chassis a minor facelift. It now features a textured palm wrest area that is more fingerprint-resistant. The touchpad still features integrated mouse buttons, but Dell dropped support for multitouch gestures, which the company says weren’t in high demand.

The laptop measures 10.5″ x 7.8″ x 1.3″, and those are the same dimensions whether you get a 3 cell or 6 cell battery. That’s because the battery compartment is designed to accomodate either battery size without the battery jutting out from the netbook’s back or bottom. In fact, most versions of the Inspiron Mini 10 will ship with 6 cell batteries, because Dell says that long battery life has become a priority for netbook customers.

Dell is continuing its trend of offering more customization options than just about any other netbook vendor. That includes Bluetooth, 3G, and GPS options, as well as a number of entertainment-focused options including a higher resolution 1366 x 768 pixel display, a Broadcom Crystal HD Media Accelerator, and a built-in TV tuner.

I asked Dell why the company decided to go with the Broadcom solution which enables 720p and 1080p video playback on devices with low power processors, rather than the NVIDIA ION platform which does the same, but which also supports 3D gaming graphics. The answer is basically that Dell feels you get more bang for your buck with the Broadcom accelerator if you’re primarily interested in HD video, since the media coprocessor is cheaper and takes less of a toll on battery life than the NVIDIA ION chipset.

The new Inspiron Mini 10 will be available in 7 colors: black, white, blue, purple, red, green, and pink. You can also personalize the netbook in Dell design studio, with more than 200 design options to choose from.