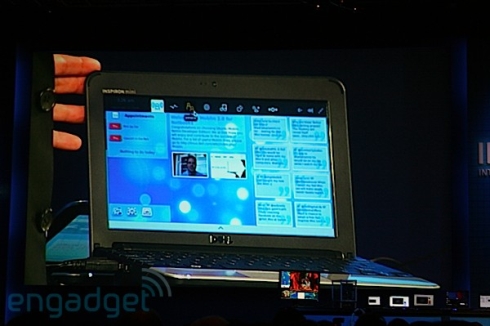 Dell offers the Inspiron Mini 10v netbook with a choice of Windows XP or Linux. Starting tomorrow morning you’ll also be able to pick up a special developer edition running pre-release Moblin Linux software. To be exact, it will be running something called Ubuntu Moblin Remix Developer Edition, and as you may have guessed that means it will be a custom version of Ubuntu Linux developed by Canonical with elements of Moblin incorporated.

The Moblin version of the Mini 10v is being targeted specifically at developers and early adopters and isn’t really meant for the general public. It clearly hasn’t been as extensively tested as the Windows and Ubuntu Linux versions of the netbook. But starting Thursday, September 24th the system will be available for purchase from Dell’s web site.

The operating system will have the Moblin Linux user interface as well as a couple of extra programs including OpenOffice.org. The goal is to give developers a platform for testing out applications designed for Moblin, but it sounds like this will not only be the first netbook to ship with Moblin, but it will also have a desktop environment that’s pretty usable for anyone who wants to make this their primary netbook — provided they’re willing to put up with any bugs that haven’t been caught yet.

You can also download the Ubuntu Moblin Remix Developer Edition disc image from Dell’s Moblin wiki page starting today if you’d rather install it on an existing Dell Mini 10v. Right now the disc image is designed to wipe your hard drive, so it’ll probably take some tweaking if you want to set up a dual boot system. I wouldn’t be shocked if that disc image also worked with other, non-Dell netbooks. After all, the hardware on most Intel Atom powered netbooks is remarkably similar. But neither Dell nor I are making any promises.

Update: Engadget reports that the Dell Inspiron Mini 10v with Moblin Linux will have a starting price of $299.