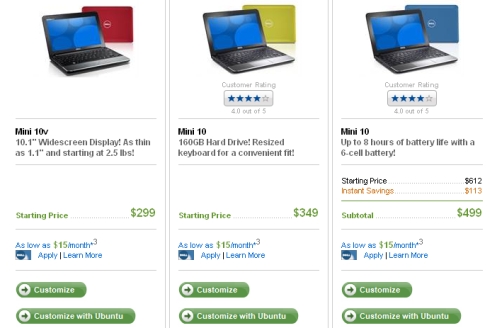 Dell has been offering Ubuntu Linux as an option for its netbooks since day one. But the company has made a habit with its last few product launches of offering Windows XP or Vista at launch and only offering Linux later on. Now that appears to be changing. The Dell Inspiron Mini 10v launched this week with both Windows and Ubuntu Linux options available, and according to BetaNews, Dell promises to do the same thing on all future netbook launches.

That’s the good news. The bad news is that customizing a Dell Inspiron Mini 10v with Ubuntu doesn’t seem to save you any money, even though Dell doesn’t have to pay the Windows licensing fee. The base price for an Inspiron Mini 10v is $299 whether you decide to go with Windows or Linux.