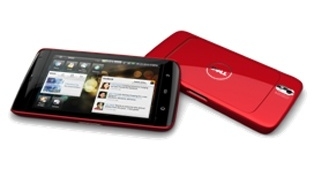 We’re still waiting for Dell to officially launch the Streak 5 inch Android tablet in the US. But it’s been available for UK customers for a little while… especially UK customers that like their mobile technology in a choice of black or black. But now Dell UK is offering the handheld Android tablet in a shiny new red version.

The specs remain the same. The tablet runs Google Android 1.6, has a 1GHz Qualcomm Snapdragon CPU, and 16GB of storage. It runs £449, or about $715 in the UK without a contract.. although there’s evidence that it will be cheaper in the US.