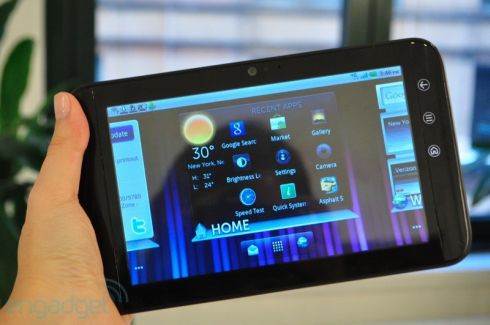 The Dell Streak 7 is expected to go on sale on February 2nd, when you’ll be able to pick up the 7 inch Android tablet from T-Mobile for $200 with a 2-year contract or $450 for a contract-free tablet. But a few dozen tech bloggers apparently got a chance to check out the tablet early, because reviews are popping up left and right. Here’s a quick overview:

I’m seeing conflicting reports on touchscreen sensitivity. Some reviewers reported the screen was very responsive, while others had problems with it. The same goes for the 4G connection speeds. Theoretically T-Mobile’s HSPA+ network can provide download speeds as fast as 21Mbps, but while jkOnTheRun got around 5.5Mbps, Gizmod reported top speeds of just 1.8Mbps. Your results may vary depending on your location, but it seems unlikely that you’ll reach the theoretical top speed very often.

Several reviewers also point out that the Streak is designed for use in landscape mode, with the buttons close together on the right side for easy thumb access. You can rotate the screen, of course, but if you’re used to navigating an Android home screen in portrait mode, the Streak 7 may take some getting used to.

There are dozens, if not hundreds of Android tablets expected to hit the market this year, and the Dell Streak 7 is definitely one of them. And if you can’t wait any longer to get your hands on a relatively inexpensive tablet with an NVIDIA Tegra 2 processor and 4G mobile broadband, it’s one of the only games in town. But it sounds like the low resolution display, Android 2.2 operating system, and poor battery life, along with some other design decisions (where’s the dedicated search button for Android 2.2?) may make the Dell Streak 7 a tough sell.