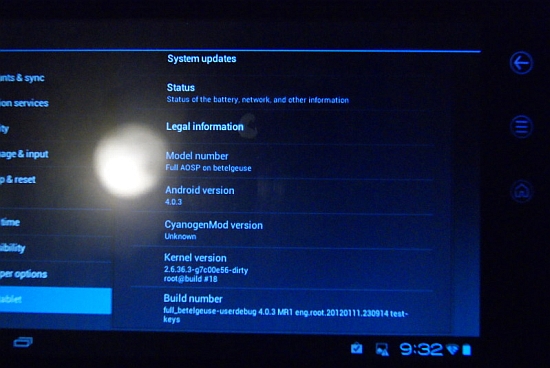 It’s not an official release, but a freshly-baked Android 4.0 ROM has been made available for the Dell Streak 7 tablet. TabletROMs forum users Giveen and DJ_Steve have uploaded the fruits of their labor, and if you’re one of the Dell faithful who picked up a Streak 7 before it was retired from their website  back in December you can now update to Google’s latest OS.

Before you head over and download the ROM, be aware that it’s a beta build — and that being the case, there are still bugs to be worked out that could cause force closes and other glitchiness. There’s also some important hardware that doesn’t work yet, like the camera and cellular radios. Video acceleration also hasn’t been implemented yet, the gallery app won’t recognize SD cards, and you won’t be able to mount your Streak 7 as a USB mass storage device when plugged in to your computer.

So what does work right now? Touchscreen input, Wi-Fi, Bluetooth, audio, and most sensors are working — and the core Google apps are mostly functional, too. If that’s enough to convince you to make an early transition to Ice Cream Sandwich, head on over to TabletROMs and grab the download.