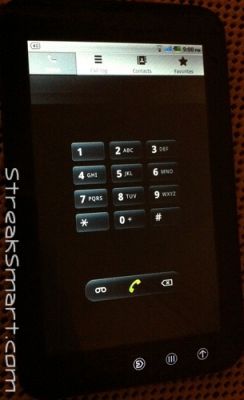 The Dell Streak 7 is an Android tablet with an NVIDIA Tegra 2 processor and Android 2.2 operating system. While its little cousin, the Dell Streak 5 is basically a large smartphone that can connect to the internet over 3G and make phone calls, the Streak 7 doesn’t officially support phone functionality. Dell and T-Mobile are offering it as a standalone tablet with 3G and WiFi access.

But Jenn K. Lee at StreakSmart discovered something interesting: If you tap the phone icon to open the contact manager, you get a phone-like user interface. And you can actually get it to bring up a dialer, show voicemail, and even initiate phone calls. The only problem is that calls always fail after a split second.

I would be tempted to think the phone functionality was just a bit of legacy code that Dell forgot to remove from the Android 2.2 operating system except that Jenn noticed she could actually call another phone and have it ring. So clearly some sort of call is being routed over the phone network, even if the call isn’t completed.

It’s possible that Dell could offer phone capabilities for the Dell Streak 7 tablet in Europe or other countries. There’s precedent for that: It’s only the US version of the Samsung Galaxy Tab which doesn’t make phone calls. Around the rest of the world you can use the 7 inch tablet as a (very) large smartphone.

You can check out the video from StreakSmart after the break.