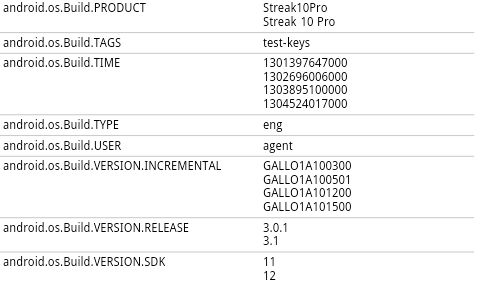 Dell is expected to launch a 10 inch tablet running Google Android this summer, so it’s no surprise that the company is testing early builds of the tablet. But the folks at Streak Smart found evidence suggesting that Dell isn’t just testing the tablet with Android 3.0.1 — the current version of the Android operating system for tablets. Dell also appears to be testing an unannounced version of Android dubbed Android 3.1.

The evidence comes from the GLBenchmark web site, which records system info and test results for various devices when users run the company’s benchmarking tool.

The tablet appears to be called the Dell Streak 10 Pro. And as expected it has an NVIDIA Tegra 2 processor. Aside from the operating system there aren’t any real surprises. GLBenchmark suggests the tablet has a 1280 x 752 pixel display instead of the more standard 1280 x 800 pixel screen –but it’s likely that the discrepancy is due to the status bar at the bottom of the Google Android 3.x Honeycomb user interface.

One reply on “Dell Streak 10 tablet with Android 3.1 test results in the wild?”