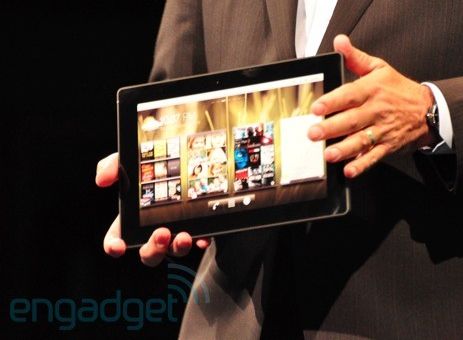 Moments after introducing the new Dell Streak 7 tablet, Dell also showed off a 10 inch model called, cleverly enough, the Dell Streak 10. It looks a lot like the 7 and 5 inch models, but it has a larger display.

Engadget reports that the unit shown on stage today was just a non-working dummy unit with a static image, so I wouldn’t place too much stock in the user interface, but it looks like it the tablet will run Android, based on the dock icons on the bottom of the screen.

According to Laptop Magazine, the tablet is aimed at business users and it may run Android. T

Update: Dell has confirmed that it will launch a 10 inch tablet called the Dell Streak 10 Pro with a 1280 x 800 pixel display and Android 3.x Honeycomb operating system this year. Initially the tablet will be available in China, but it could eventually expand to other markets.

One reply on “Dell Streak 10 inch tablet in the works”