Dell’s XPS line of thin and light laptops with 13.3 inch and 15.6 inch displays have been turning heads for years.

Now it looks like Dell could be planning to launch two new models in 2020: a Dell XPS 17 laptop with a bigger display and something called the “XPS Dual Screen Maximus.”

That’s according to a leaked product roadmap obtained by the folks at Tweakers.net. 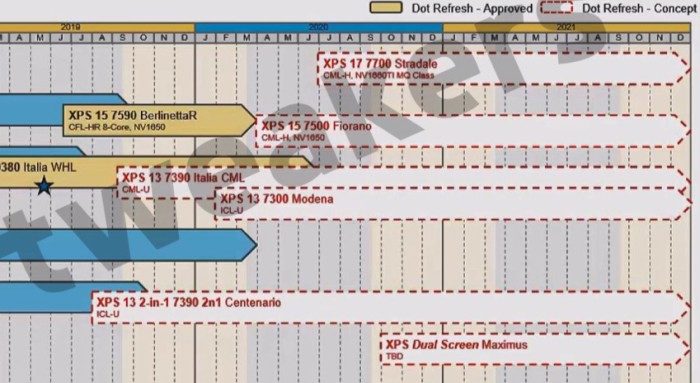 Keep in mind, Dell hasn’t officially confirmed that it’s developing an XPS 17 or XPS Dual Screen, so take this with a grain of salt. But if the company is working on these new laptops, it’s not hard to guess what the Dell XPS 17 would look like: a bigger XPS 15.

It’d probably still be a relatively thin and light computer with slim screen bezels and materials like carbon fiber and magensium alloy to craft a durable, but lightweight laptop.

This wouldn’t be the first thin and light laptop with a 17 inch screen. LG wins that honor. The company unveiled the LG Gram 17 at CES in January, and it’s a 17 inch laptop that weighs less than 3 pounds, measures about 0.7 inches thick, and features a 2560 x 1600 pixel display and Intel Core i7 Whiskey Lake processor.

I suspect the Dell XPS 17 will be a bit heavier than the LG Gram 17 — Dell’s current-gen XPS 15 laptops tend to weigh about 4.6 pounds. But they also feature higher-performance Intel Coffee Lake-H processors and optional support for discrete graphics

As for the Dell XPS Dual Screen Maximus, it’s a bit trickier to figure out what that will look like. My best guess is that it will be something like Lenovo’s Yoga Book C930, which is a compact computer with a 360-degree hinge that lets you use it in laptop or tablet modes… but which lacks a physical keyboard. Instead it has an E Ink display where you’d normally find a keyboard.

Lenovo’s dual-screen laptop is aimed at artists and others who want a portable device that they can use as both a writing/drawing surface and as a normal laptop. But the lack of a physical keyboard means that touch typing is going to take a little getting used to on this style of device.

If the Dell XPS Dual Screen does have a screen-instead-of-keyboard design, it’s not clear if it would be an E Ink screen like Lenovo’s, or a secondary full-color display. But it’s possible that the dual screen device could have a different design altogether.

Fore example, it could be a more conventional-looking laptop that has a second screen that you can slide-out for times when you want to use two screens instead of one. Or maybe it’s a laptop with a screen that faces the keyboard and a second screen on the outside of the lid.

But given that Intel is pushing designs that look a lot like the Lenovo Yoga Book C930, I’m betting that Dell’s dual screen laptop will look more like that, if and when it launches.

Oh, and while it’s unclear if the leaked roadmap is accurate on all fronts, it does also mention a refreshed Dell XPS 7590 coming this summer with an 8-core, 9th-gen Intel Coffee Lake processor and NVIDIA GeForce 1650 graphics. Not only are those specs entirely plausible, but they’ve pretty much been confirmed by Dell.