Dell is preparing to launch a laptop with a new set of laptops with big screens and relatively small bodies.

The upcoming Dell Precision 5750 mobile workstation and Dell XPS 17 9700 are expected to feature 17 inch displays, support for up to an 8-core Intel processor, NVIDIA graphics, and a starting weight of just 4.7 pounds.

Dell hasn’t officially announced either laptop yet, but details about the upcoming notebooks have been leaking for the past year. Now the folks at Reddit’s /r/Dell forum have posted a leaked product slide that gives us an even better idea of what to expect. 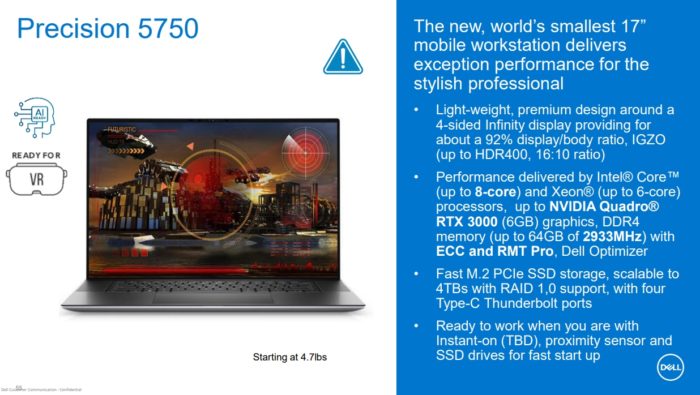 In a nutshell, the Dell Precision 5750 is expected to feature a 17 inch display surrounded by slim bezels for a 92-percent screen-to-body ratio.

The display will be an IGZO display with a 16:10 aspect ratio and HDR support.

Other features are expected to include support for up to:

The laptop also has four Thunderbolt 3 ports. Dell says the Precision 5750 has a starting weight of 4.7 pounds, and that it’s the “world’s smallest” mobile workstation with a 17 inch display. That all depends on your definition of mobile workstation, but it certainly looks to be one of the smallest 17 inch laptops to date. The only other laptop that’s in the running would be the LG Gram 17 line of notebooks, which weigh just 3 pounds, but which have substantially less powerful Intel Ice Lake processors.

Less is known about the upcoming Dell XPS 17 9700, but it will likely have the same chassis as the Precision 5750, but consumer-grade specs.

That means Xeon processors probably won’t be an option, you won’t get support for ECC memory, and you’ll have NVIDIA GeForce graphics rather than Quadro graphics.

Update: More details have been uncovered thanks to a Dell France website that went live a bit early (it’s since been removed).