All-in-one desktops can save some space by placing the guts of a desktop computer into the back of a PC monitor. But that can also be a pricey solution, because when it comes time to upgrade to a more powerful PC, you also have to replace what may be a perfectly good display.

Dell’s Optiplex 7070 Ultra takes a different approach. It’s basically a PC-in-a-monitor-stand that you can use with a variety of monitors up to 27 inches in size.

That way you can use the same display indefinitely. But when it comes time to upgrade the computer you can just slide the PC module out of the stand and replace it with another one.

Dell says the OptiPlex 707 Ultra will be available starting September 24th, with an “average price of $749.”

At launch Dell will offer modules with 8th-gen Intel Whiskey Lake Core i3, Core i5, and Core i7 processor options — but the chips will be set to run at 25 watts rather than the usual 15 in order to offer better-than-laptop performance.

Dell says the OptiPlex 7070 Ultra also supports up to 64GB of RAM, up to 1TB of PCIe NVMe solid state storage, and up to a 2TB hard drive — because not only is the entire module replaceable, but you can also open up the module and replace or upgrade the memory and storage.

There are two DDR4 SODIMM slots for memory, a 2.5 inch drive bay for a hard drive or SSD, and an M.2 2230 slot for solid state storage.

While you can’t easily upgrade the CPU in a module since it isn’t socketed, you can just replace a module while keeping the same stand and monitor.

That means you could theoretically buy a Core i3 model and decide to upgrade to a Core i5 or Core i7 down the road. But it also means that in a few years you may be able to upgrade to a next-generation processor family.

Dell says it’s committed to supporting this modular design for years to come, and the company is already working on a 2nd-generation module… although Dell won’t say what’s on the inside. 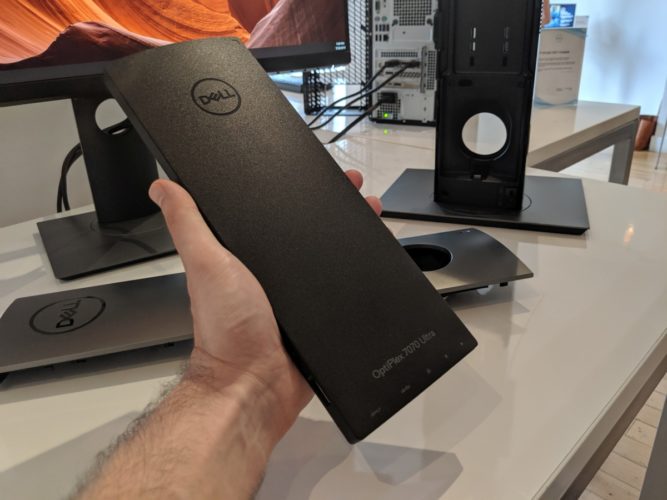 The OptiPlex 7070 features three USB 3.1 Type-A ports, and Ethernet jack and a USB-C port that supports data, video output, and can work as a power input. In fact, if you use the computer with a USB-C monitor, you can power the OptiPlex by running a USB-C cable cable from the display to the PC module. 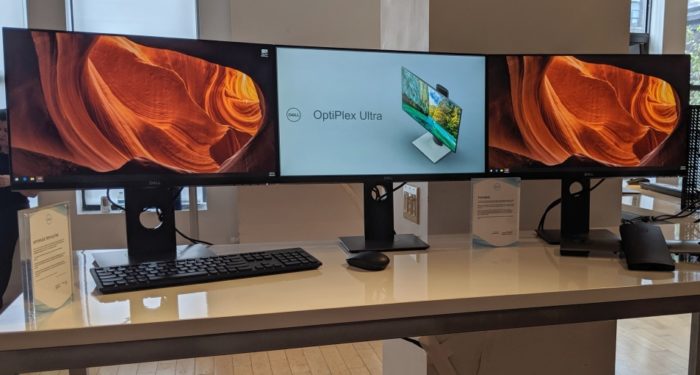 Dell isn’t the only company to launch a modular all-in-one desktop this year. HP introduced its Mini-in-One family in May. But what HP did was adapt its existing HP Mini line of small form-factor desktop computers by creating a display with a slot that can hold one of the little computers.

Dell created an entirely new form factor that allows you to use existing displays. Incidentally, Dell showed me an early version of its modular PC several weeks before HP introduced the Mini-in-One, but Dell wasn’t allowing journalists to take pictures or write about its product at the time.