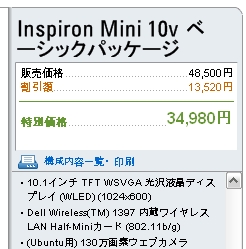 When 9 and 10 inch netbooks started hitting the market in mid-2008, 1024 x 600 pixel screens were the standard. But over the past half year or so we’ve seen a growing number of PC makers slap 10.1 inch, 1024 x 576 pixel displays onto their netbooks, as if those 24 extra vertical pixels didn’t matter. And the truth is, for most people they won’t. But if you don’t care about having videos with a 16:9 aspect ratio fitting perfectly onto your screen without any black space above or below the video window, those extra pixels are nice to have. They translate into an extra line or two of text on most web pages.

The Dell Inspiron Mini 10v is one of those netbooks that typically comes with a 10.1 inch, 1024 x 576 pixel screen. But Portable Monkey noticed that Dell Japan is listing the Mini 10v as having a 10.1 inch, 1024 x 600 pixel display. So either the company is starting to use a new display, or Dell Japan has a typo on its web site.

Has anyone ordered a Mini 10v from Japan? If you can confirm the screen resolution, let us know in the comments.