Late last year Intel and AMD announced they were working together on a new set of chips that combine an Intel Core H-series quad-core processor and discrete-class AMD Radeon Vega graphics. At CES 2018 we’re starting to get a look at some of the computers that will ship with those new Intel/AMD Kaby Lake G-series chips.

One of the first is Dell’s new XPS 15 2-in-1 laptop, which is a convertible notebook with a 15.6 inch touchscreen display, a 360 degree hinge, support for an optional Dell Active Pen, and a 65 watt 8th-gen Intel Core processor with Radeon RX Vega M graphics featuring 4GB of dedicated high bandwidth graphics memory. 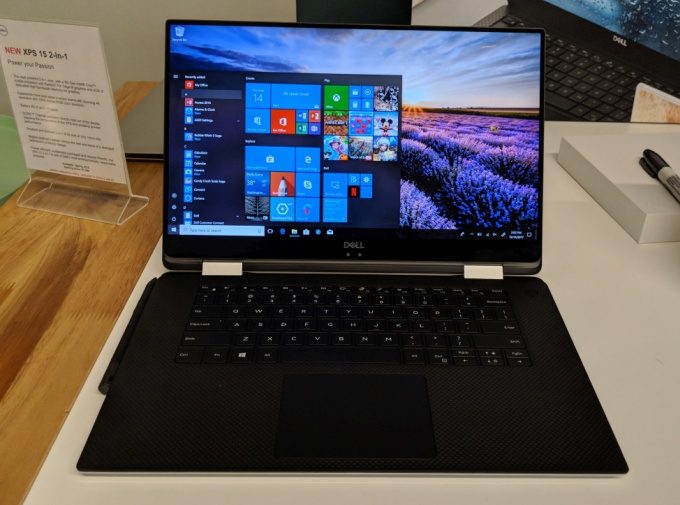 The notebook basically pairs a 45-watt quad-core Intel CPU with AMD graphics on a single package. I’m told that if the same CPU and equivalent graphics were on separate packages, the TDP would be 85 watts rather than 65.

Specifically, Dell will offer models with a choice of Core i5-8305G or Core i7-8705G chips. Both chips feature Radeon Vega M GL graphics with 20 Compute Units and 1280 stream processors. the key differences are in the CPU: the Core i7 version has more cache and faster clock speeds.

While Dell isn’t positioning the XPS 15 as a gaming laptop, the company says it can handle some gaming duties, and offers performance that’s a bit better than you’d expect from a PC with an NVIDIA GeForce 1050 graphics card.

Weighing in at a little over 4 pounds, it’s relatively portable for a 15.6 inch laptop, and the computer measures 16mm (0.63 inches) thick, which makes it surprisingly compact for a computer with this type of CPU and graphics power.

Dell will offer 1080p and 4K display options and the company says you can expect up to 12 hours of battery life while web surfing or streaming videos on the full HD model or about 9 hours of run time with the 4K version (which also offer 100% Adobe RGB color).

Battery life will probably drop significantly if you’re taking advantage of the GPU for gaming, video editing, or other tasks that leverage the AMD graphics rather than the integrated Intel UHD graphics that you also get with Kaby Lake G-series chips.

There’s no slot for storing the pen when it’s not in use, but it’s magnetic, so you can snap it to the side of the computer. The magnets on the demo model I played with aren’t nearly as strong as those on the Eve V tablet though, so I wouldn’t want to leave the pen attached when transporting the tablet. It’s more like the magnet lets you put down the pen for a little while without worrying that it’ll roll off the table, but you might want to come up with a better solution for permanent storage.

One surprising thing about the Dell XPS 15 is that, like its smaller XPS 13 sibling, it lacks full-sized USB or HDMI ports. The convertible laptop has microSD card and headset jacks, along with 4 USB Type-C ports, so you’ll need a dock or adapter if you want to plug in a display, Ethernet cable, or anything that requires a full-sized USB port.