Ultrabooks and tablets may be nice to use on the go thanks to their compact size, light weight, and long battery life. But when you want to connect a few displays, keyboard, mouse, external storage, and other peripherals you might not have enough ports.

Did I say ports? Where we’re going we don’t need any ports…

Intel’s WiGig protocol allows for high-speed, wireless connection to a docking station and Dell has just launched a rather nifty wireless dock that lets you connect external devices to a mobile computer without plugging anything into your laptop. 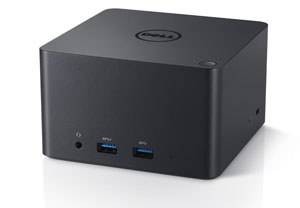 This isn’t Dell’s first WiGig-compatible dock. The company already offers a smaller, less capable model. But the new version supports VGA, HDMI, and DisplayPort, multiple USB 3.0 and USB .2.0 ports, audio jacks, an Ethernet port. It can support up to two external displays at once.

Dell says the dock is compatible with Latitude 7000 Series and Latitude 5000 Series notebooks as long as they have Intel’s Tri-Band Wireless-AC 17256 option installed. I can’t imagine why the dock wouldn’t work with other computers featuring the same wireless card. Update: You know, unless someone decides to “lock” the hardware so it only works with computers from a single manufacturer… which is apparently an option.

HP offers a similar dock for about $239.