Dell helped kick off the thin-bezel laptop trend in 2015 when the company launched a Dell XPS 13 laptop with a 13.3 inch display stuffed into a laptop the size of a typical 11.6 inch model.

Since then, Dell has updated the XPS 13 several times by upgrading the processor and other internal components. But the design hasn’t changed much… until now.

Dell is kicking off 2018 by introducing an updated XPS 13 with a thinner body, slimmer bezels, a new set of ports, and two color options: black or white.

Update: the new Dell XPS 13 is up for pre-order from Dell.com. 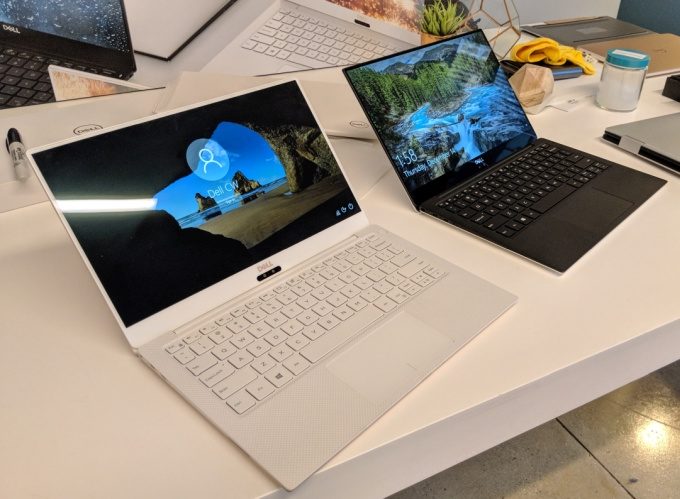 The new Dell XPS 13 with 8th-gen Intel Core processor options will be available this month for $950 and up. That’s the starting price for a new XPS 13 Developer Edition with Ubuntu Linux. Windows models will sell for $1000 and up.

Last year’s models will also continue to be available through this summer, with prices starting at $800 for a model with a 7th-gen Core i3 chip (which makes sense, since there is no 8th-gen Core i3 processor yet).

Dell has also added a Windows Hello-compatible IR camera that allows you to unlock the computer using facial recognition, and the camera has been moved… from the left side of the laptop to the center. Unfortunately, it’s still below the screen instead of above the display, which means you may end up photographing your knuckles or getting some unflattering shots of your chest and/or chin when taking selfies or making video calls.

I’m told Dell knows the camera position is less than ideal… but that the company determined that most people don’t actually use the webcam very much, relying on smartphones for selfies and video calls anyway. So in order to have as slim a top bezel as possible, the company continues to put the camera below the screen. Interestingly, Dell’s new Latitude laptops have slightly thicker top bezels and cameras above the screen. Apparently Dell figures business customers do use their webcams. 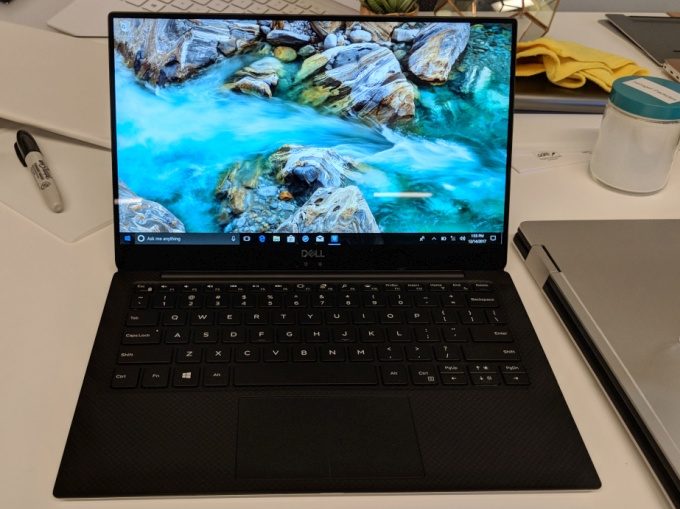 Speaking of super-slim bezels, the new XPS 13 top and size bezels are thinner than ever, at about 4mm.

Dell has also changed the port layout: the 2018 XPS 13 has two Thunderbolt 3/USB Type-C ports on the left side, one USB 3.1 Type-C port on the right side, and headset jack and microSD card port.

There are no full-sized USB ports, no HDMI ports, and no dedicated power jacks. The laptop comes with a USB Type-C power adapter and you can plug it into any of the USB ports to charge the notebook. 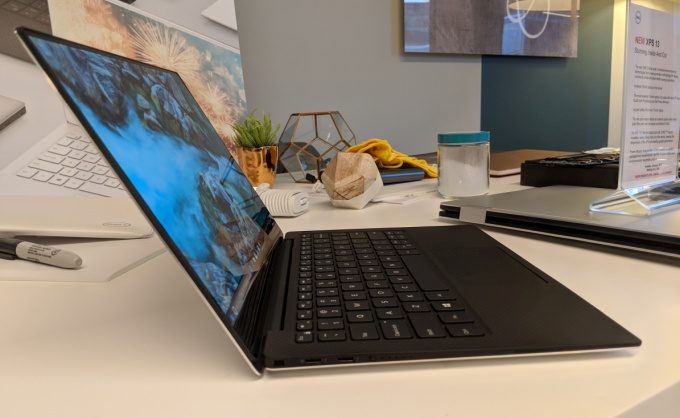 You’ll need an adapter or docking station if you want to plug in an Ethernet or video cable though.

Or you can buy a 2017 model if you’d prefer a laptop with a few full-sized USB ports.

Dell now offers a new white color option, but it’s not just the color that’s new. The black and silver XPS 13 has a carbon fiber composite palm rest with a soft touch finish, but the white version has a glass fiber palm rest with a harder feel to it. At first, the white model felt a little plastic-like, but the more time I spent with it, the more I got to like the feel of the textured glass fiber finish.

The white version also has blue backlight for the keyboards rather than white, since Dell determined that white-on-white looked funny.

Here’s a run-down of the specs and options that will be available for the 2018 Dell XPS 13 at launch:

Dell says the laptop supports more than 19 hours of battery life according to the MobileMark battery test (or 11 hours with a 4K display), but you should probably knock at least a few hours off that to get an idea of what to expect in real-world settings.

The company also updated the cooling system, using dual fans and dual heat pipes in order to keep Intel’s 15 watt processor cool even when it’s running at up to 27 watts.

Dell will also ship the computer with software that allows users to choose from different performance profiles depending on whether they want to prioritize performance or battery life… with the lower performance mode also allowing the CPU to run at a cooler temperature and keep the fan from making as much noise. The company is still fine tuning that software though, so there won’t be much difference between the performance modes at launch. Dell plans to offer a BIOS update in the future that will give users more control over the computer’s CPU and cooling performance.