Dell’s Latitude Rugged line of computers are designed to be used in conditions where a normal laptop would fall to pieces. Like Panasonic’s Toughbook line of computers, Dell’s Rugged models are aimed at industrial, manufacturing, military, law enforcement, and other government customers… as well as hikers, mountain climbers, or other adventures looking for a computer that can withstand a heavy fall or encounters with dust, water, and extreme heat or cold.

So far most of Dell’s rugged models have been laptop or convertible-style computers. Now Dell is launching its first rugged tablet.

The Dell Lattitude 12 Rugged Tablet is the company’s most compact rugged PC to date… although it’s still kind of a behemoth compared with most consumer-oriented tablets. 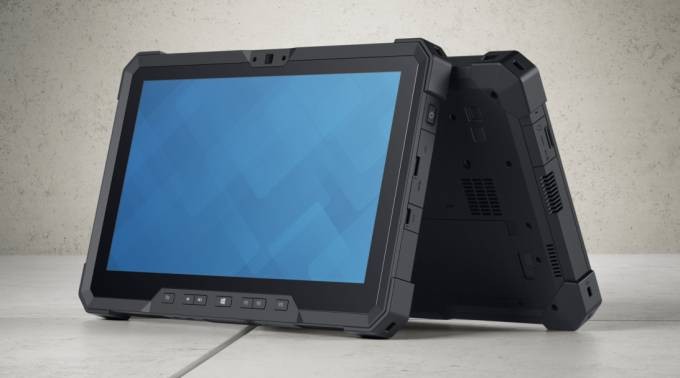 The tablet weighs about 3.6 pounds and measures about an inch thick. But it can withstand a 4 foot drop, rain, dust, and shocks. In fact, Dell says the Latitude 12 Rugged could be used in hurricane conditions.

It has covers for most of its ports, a 10-finger multitouch display that can be used even when you’re wearing gloves, and an outdoor-viewable display.

Dell says the display offers the same kind of outdoor visibility you’d expect from a 1,000 nit display, while using about half the lumens. The company says it uses the kind of anti-glare and anti-reflection technology you’d see in an in-car display panel to make the tablet easy to use outdoors without draining the battery too quickly. 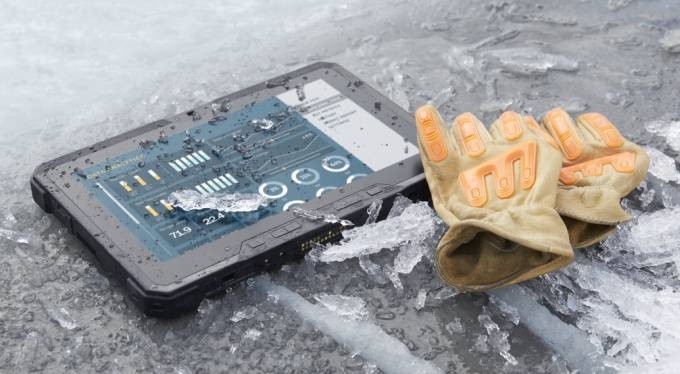 Speaking of batteries, the Dell Latitude 12 Rugged tablet has two of them, and they’re hot-swappable. That means you can remove one battery without even shutting down the computer. You should be able to get up to 12 hours of run time from two fully-charged batteries. But since you can swap out batteries for freshly charged ones, you can keep the Latitude Rugged 12 running indefinitely.

There’s optional support for 4G LTE, and the tablet has USB 3.0, micro HDMI, microSD card, and micro serial ports built-in, as well as Pogo-pin connectors for an optional keyboard dock.

In addition to that waterproof keyboard cover, Dell will offer a variety of accessories including an active stylus, a desktop dock, and support for modules that you can slap onto the back of the tablet to add features such as extra USB 3.0 ports, an Ethernet jack, a barcode scanner, or a magnetic stripe reader.

Dell is selling an entry-level model with 4GB of RAM and 128GB of storage for $1600, making the Latitude Rugged 12 pretty expensive for a consumer tablet, but pretty cheap for a professional-grade rugged computer designed for use in extreme environments.

While Dell figures the target audience for this tablet is the same as for its other rugged products (industrial, government, and other enterprise customers), the price tag could make this a reasonably affordable option for for outdoorsy-types.