Dell plans to expand its business-class line of tablets with a new model featuring an 11 inch display and a detachable keyboard. Microsoft briefly showed off a previously unannounced tablet called the Dell latitude 11 5000 Series 2-in-1 at an event in Berlin today. 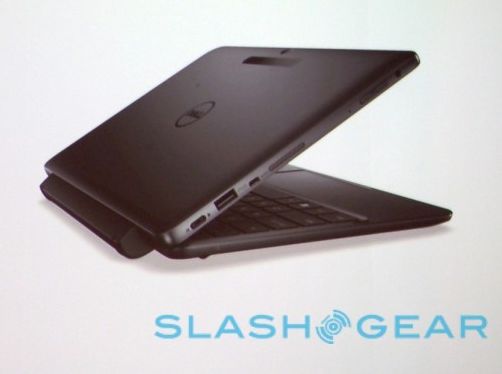 Aside from the fact that the tablet runs Windows 10 and supports the “Windows Hello” secure login feature, Microsoft hasn’t said much about the tablet, and neither has Dell.

But the photos shown in Berlin make it clear that the tablet has at least a few USB ports including a full-sized port and what looks like a USB Type-C port, as well as a micro HDMI port. There are stereo speakers on the sides of the tablet, and the detachable keyboard dock looks pretty solid, allowing you use the tablet like a notebook.

There’s no word on what kind of specs the new Latitude 11 5000 Series tablet will feature, how much it will cost, or when it will be available for purchase.

Update: German site Giga has posted additional details, gleaned from leaked documents. If the information is correct, the Dell Latitude 11 5000 Series 2-in-1 will feature a 10.8 inch, 1920 x 1200 pixel display, support for a Dell Active Stylus, a backlit keyboard dock, and a USB Type-C connector.

It’s expected to have a MIL-STD tested case and the 2-in-1 tablet should be available in January, 2016.