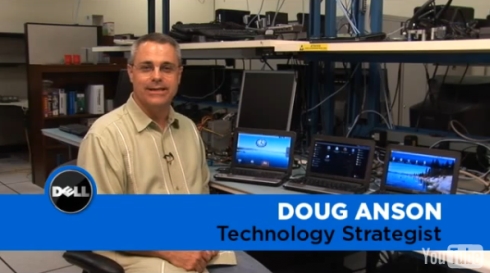 Dell has yet to officially announce anything about a device running the Google Android operating system. But rumors of an Android powered Dell netbook have been floating around since software developer Bsquare accidentally(?) mentioned a Dell Android netbook in a press release a few weeks ago. Now to add fuel to the flames, Dell has posted a video on its official blog showing a Dell Inspiron Mini 10v running Android.

The video features Dell Technology Strategist Dough Anson sitting in front of 3 Inspiron Mini 10v models, each running a different operating system. One has Dell’s custom version of Ubuntu Linux. The next is running Ubuntu Netbook Remix, and the third is sporting Google Android Cupcake edition. Anson points out that Dell hasn’t announced any plans to build a netbook with Android, but he does say that after he ported the operating system to run on the Mini 10v that it’s “very snappy,” and “runs very nicely.”

Of course, he also points out that Ubuntu Netbook Remix works well out of the box. But I’d be surprised if Dell decided to scrap its own custom version of Ubuntu just because Ubuntu Netbook Remix runs well on the Mini 10v. So I wouldn’t read too much into the fact that a Dell employee is experimenting with Android… yet.