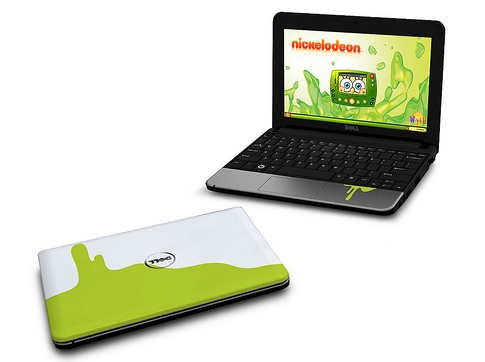 Asus isn’t the only company bringing a netbook aimed at kids to market. Dell has announced it’s launching a Nickelodeon-themed netbook that can be personalized with characters from TV shows including SpongeBob Squarepants and iCarly. A “green slime” edition is also available. The machines run Windows XP, but have a custom Nickelodeon theme built by Stardock, which features links to Nickelodeon online games and video content.

While these netbooks feature kid-friendly designs and software, they aren’t necessarily as education-oriented as some other netbooks in the space like the OLPC XO Laptop or Intel’s Classmate PC. Both of those netbooks are designed for use in classrooms and feature educational software. But the Nickelodeon-themed Inspiron Mini 10v also features parental control software.

Dell plans to roll out future co-branded products in the future. That included college or sports team-themed computers.