Dell’s newest tablet features a 10 inch display, an Intel Atom Clover Trail processor, and Windows 8 Pro software. It’s called the Dell Latitude 10, and if it looks familiar, that’s because we’ve seen it before.

But now the company is making the Latitude 10 official, and promises to release the tablet when Windows 8 launches on October 26th. 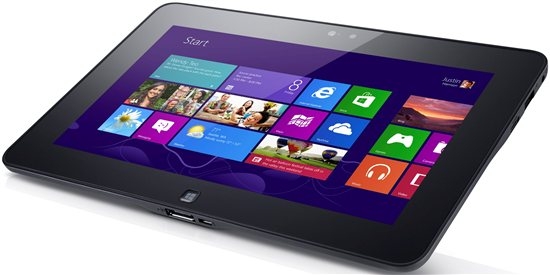 The Latitude 10 has a 1366 x 768 pixel display, a capacitive touchscreen protected by Gorilla Glass, 2GB of RAM, and up to 128GB of storage on a solid state disk.

Unlike most consumer tablets we’ve seen in recent years, the Dell Latitude 10 has a swappable battery, which could make the tablet a little more attractive for enterprise customers. The fingerprint scanner, TPM module, full-sized USB port, and support for mobile broadband probably don’t hurt either.

The tablet supports WiFi and Bluetooth and has front and rear cameras.

Dell will also offer an optional dock that adds 4 USB 2.0 ports, Ethernet, and HDMI ports, letting you use the Latitude 10 like a desktop PC.

According to The Verge, the Dell Latitude 10 weighs 1.5 pounds and measures about 0.4 inches thick, which means that while this tablet is aimed at business users, it’s not much bigger or heavier than a typical 10 inch Android or iOS tablet.